The Alternative We Need Right Now 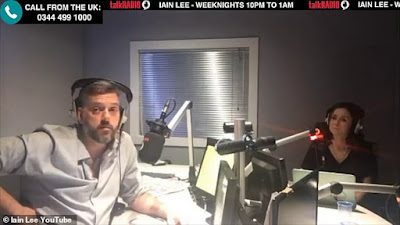 So we are all headed for an election on 12th December.

It isn't the usual ennui at weeks of political coverage or the whole seemingly flawed solution to an unsolvable problem. It's that it's my birthday and when I am lying in post celebratory curry mess I won't be able to escape into the world of my favourite radio show for a couple of hours.

It's been like that a few times of late when the 'B-thing' (I can't bring myself to write that word and I curse Peter Wilding for coining the phrase in 2012) action in parliament has led to ' The Late Night Alternative with Iain & Kath' being nudged off Talk Radio so that IT can be discussed ad nauseum until the wee small hours. At the same time as every other BBC and commercial speech radio outlet - with the same rent-a-gob panellists and MPs popping up spouting their mantra.

You could just have a list of these opinions and people could phone up and say 'Well I think 7, 23 and 2". It would save so much time because nothing new has been said on the subject for years. Its an ever circling Catherine Wheel of bile, mistrust, division and joyless race to the bottom. I believe America might well be pulling itself out of the nosedive but we are going full Peter Davison cliffhanger of Episode 3 of 'The Caves Of Androzani' on this one.*

The 'B thing' has killed speech radio in the UK - it used to be a breeding ground for real invention and a mix of the serious and the downright silly. It seems unbelievable now that the man who launched a thousand viral clips where he dismantles people's arguments for leaving the EU used to have a regular feature called 'Beat The Sweet'. Callers would try and guess what sweet James O'Brien had in front of him in a 20 questions like format - did it have a wrapper, was it chewy, was it minty, what colour was it? He claims that he does do other things than talk about the EU but outside 'Mystery Hour' those other subjects are few and far between. In the same way politics has gone mono while the police, schools, hospitals and other public services can't get a look in as they are being butchered - anything other than our national nervous breakdown is sidelined on the airwaves.
Night time radio was even more of a lawless state with masters like Clive Bull creating community on a wide scale - oddballs, fruitloops nestles next to those discussing news events but a meeting of minds rather than a bearpit of spite. Of course social media has made our discourse coarser and the joy of Peter Cook ringing up in character as a Swedish lovelorn lugubrious Londoner, weaving his brand of nonsense is in the dim and distant past but by narrowing the focus of speech radio, the broadcasters are giving people what they think they want. To the point that they no longer have any choice - the 'B thing' is the only game in town, the battle lines are drawn, the gobs are on their sticks, the callers have their shits in mitts ready to launch - it's lazy as fuck but what's the alternative? 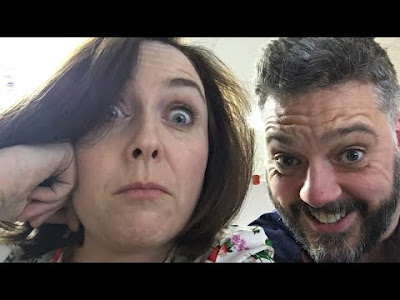 Iain Lee (11 O'clock Show, RI:SE, Strawberries) and his producer\co-host Katherine Boyle (Northern Cher, coal shed dancer) are an oasis of sweet succulent fruit and cool refreshing water in the current speech radio desert. It's hard to describe the show as it really has no format other than there are no topics, no spoon feeding or patronising the audience - the phonelines open and it grows organically from whatever is on the callers minds that night, It's a high wire act and sometimes it falls but that's the nature of innovative broadcasting and it's never boring. Except when people ring in thinking it's just like every other show on at that time of night.

For me the show is like a community of disparate people, drawn together by their love of the silly, absurd and a belief in the creativity and goodness of most people. The Late Night Alternative or TLNA made the news last year when a listener rang in having taken an overdose and Iain kept him on the air, trying to get his location, keeping him talking until the emergency services turned up. It may be crass to describe it as incredible radio but it also showed what a unique environment that Iain and Kath have created. Where callers can lay themselves bare emotionally, share their life experiences and ideas and they will be heard and given time. Often a person may ring in to harangue Iain and slag off the show yet he is skilled in getting to the core of situations and discovering the real cause of their ire. Of course the show gets its fair share of straight trolling and hateful calls which the pair also deal with like a cat batting at a mouse. All this can happen within the space of half an hour.


The trick with these kinds of shows that rely on the input of people calling not to make it feel like a club that you can't be a member of because there are regular voices that are heard nightly. Calling a radio station is a nerve wracking and odd thing to do but its also a thrill and like reaching out into the world to wave at strangers. TLNA has its long time residents but rather than put you off they draw you in because you either care about them or they drive you mad - like family and groups of friends.

It's a welcoming and inclusive place for whether you are happy or sad, feeling silly or thoughtful - just don't swear (too much), don't be a dick and don't be dull. Iain and Kath bouncing ideas off each other, arguing and generally mucking about is key to the shows success as their friendship is a wonderful thing to hear.

It would be sad if the push to discuss the 'B-thing' 24\7 means this kind of show has to lose its spark and freewheeling energy to become ordinary. There has to be room for people, for sharing, for exploring what unites us rather than constantly creating atmospheres for us to be snide and bitter towards each other. Politics never used to be this overarchingly self important presence and it is unfortunate that it has come to this. Iain & Kathrine have imagination, honesty, humour, filth and a mischievous but ultimately universal appeal that can't be learnt - it's a genuine gift

Sky Television recently launched a news channel that doesn't mention "B" because they believe a sizeable part of the UK population are sick to the back teeth of it and want other topics in the depth that is given to 'B' .

Talk Radio is in the same stable as Sky so they must be able to appreciate that radio needs a safe space too? That audience and advertising revenue is there for the taking so listen up - start shouting about your output which is different and innovative rather than how you are always going with the flow.

As the election looms the idea that their contribution to helping us through life might be dulled or tainted by the "serious" and "important" is truly worrying to us late night losers. The absurd, the irreverent and a bit of cabaret as the Titanic hits the iceberg is just as vital 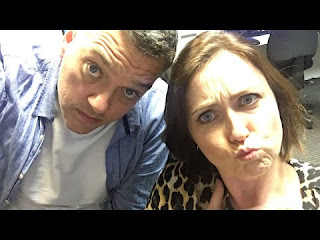 
* shut yer face
** except when the B thing is SO importantNB: The above is purely my opinion of the show and does not reflect that of the staff of Talk radio or anyone who listens to the TLNA because who would take notice of those bellends?