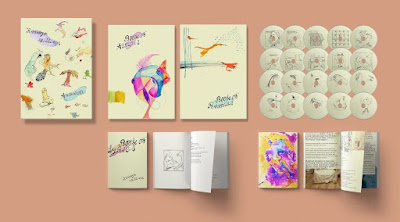 One of the threads running through singer\songwriter Kathryn Williams' work for these past 20 something years it is bringing light to the darkness - whether that be of human frailty, love conquering fear or another making life more bearable.

'Darkness\Light' from 2013's 'Crown Electric' (Sometimes there are shadows that I have to fight/ but you can make the darkness bright / You can make my darkness light) and 'Mirrorball' from 2002's 'Old Low Light' (Moonlight is so overrated \ Complete darkness is so embracive) demonstrate a love\hate relationship with the darker side of nature.

When I first encountered Kathryn's work I was just emerging from a dark place myself and finding that wish to hide from the world and the need to experience fully it for the first time in years very much at the forefront of my mind. I had been in a clinic after a nervous breakdown at the beginning of the year, anxiety, depression mixed with a form of acrophobia and loneliness had made my world fall apart into crippling daily panic attacks. I came out the other side with a renewed confidence and understanding that this was something that I would have to constantly work at to maintain a fairly normal existence. The one thing I knew I wanted to do was go to more live music as my anxiety had prevented that for so many years - the crowds, the claustrophobia, heat and heightened awareness made it all so difficult.

I can't recall if it was a session or interview on GLR, as BBC Radio London (or LDN) will always be known to some of us that I heard in late 1999 ahead of her appearance at the 12 Bar in London (don't look for it, its not there anymore) and was immediately taken by her voice on the title track from her EP 'Fade'. Perhaps I should declare my interest in that I sneaked a copy of her performance at the 12 Bar from the sound desk in exchange for a beer which I gave to Kathryn some 17 years later when I heard she was putting together a box set of her career so far.

Each remastered album is accompanied by a bonus disc of demos \ live and unreleased songs that rather than replicate material already out there on B-side and the like demonstrates a development of the albums as well as Kathryn as a songwriter and artist. So what follows is 20 selections that mean something to me and are my guide to what makes this a special collection, so lets start Side 1, Track 1…. 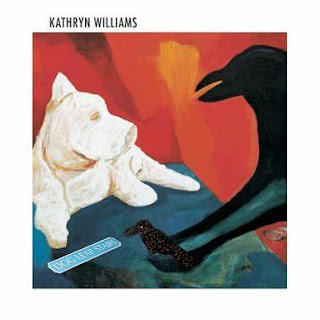 Leazes Park
Self financed and manufactured debut album and the opening track arrives like a mystery with an uneasy sense of dread and obsession. The simple backing with its insistent circular guitar figure helps hold your attention. Kathryn's vocal is woozy yet brittle and fierce, accusatory and beguiling. She draws you into her world.

No One To Blame (Live at 12 Bar, London 1999)
From her first London show and the tape I sneaked away that night is the song Kathryn claims 'gave me the reputation of being a lesbian which I went along with just to be polite'. Performed with Laura Reid on strings it has a menacing, angry and regretful air with staccato stabs echoed in the lyric. Even at this early stage she is able to hold a room quiet and attentive. 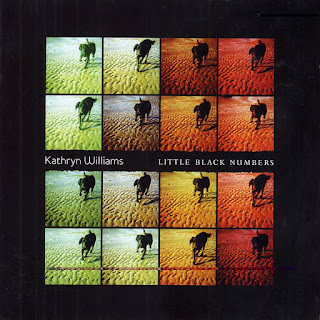 We Dug A Hole
This is a song I can probably recreate every note of in my head without needing to hear it. Her Mercury Prize nominated album bought her to a wider audience with a superb collection of songs. What gets me is the almost whispered opening lines that slowly builds swirling through waters, popcorn and sticky carpets to the joyful coda chant 'Warmer than wood, old and safe' that descends into barking and laughter.

What I find so interesting about this, one of many unreleased home recordings in the box set, is that it would not sound out of place on 'Hypoxia' many years later. It has the same directness and sensitivity that makes that album such a success. 'For as long as you need to I'll tell you what you want to hear' comes from a place of love but also resigned desperation. 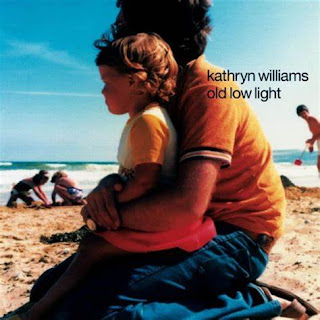 3AM Phone Call
There is just something about this one. It may be the imagery 'She looked up quick and back down \ like a flash from a lighthouse \ he saw the sea asleep in her eyes' or the lightly strummed sleepy delivery but it always makes me chilled


Little Black Numbers (live at Union Chapel)
When I first saw Kathryn perform this song using live sample looping she did so gripping hold of the box for dear life. After years of practice and probably better and smaller equipment she effortlessly creates this fan favourite performance. Doubletracking a backing vocal for the song as accompaniment, the repeat 'They're just fat men and thin girls' is built into a massed choir with added refrains - a wild cacophony of sound and its great to finally this masterful delivery on tape. 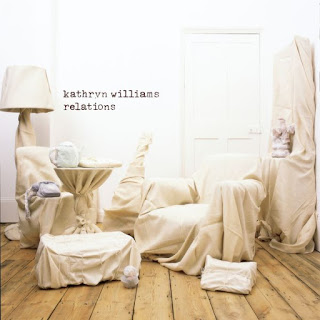 Spit On A Stranger
When promoting her covers album, Kathryn appeared slightly embarrassed about it in her own sweet way, encouraging people to check out the originals instead. Unlike many, many other artists I think its a rare successful entry in the genre. Plus the song choices and artists are not obvious and to be frank, Id never heard this Pavement song before I heard Kathryn's take and I still prefer her version for its simple and direct approach and sensitive arrangement.

Saturday Sun (Live at London Barbican 1999)
The first time Kathryn received some notice on the national stage was at this Joe Boyd curated tribute in 1999 to mark the 30th anniversary of his debut album release. It's such an assured and confident performance considering the Guardian reported her saying  'I went to get my coat and they said you're on, and they put the guitar in my hands and basically pushed me towards the stage. It was like floor-to-ceiling people and then the orchestra didn't start... I was meant to give the cue... when I got off stage, it was amazing, the sound of clapping, it was deafening.' 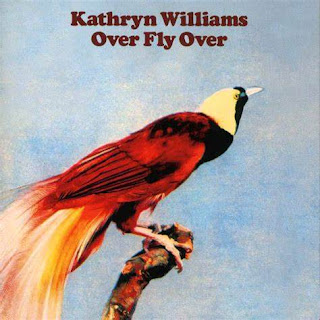 Beachy Head
What I particularly love about this track is its arrangement - the way the strings weave, swoop and dive like seagulls, the gentle muted brass and the percussive driving energy. It has a classic 60s feel about it with an superb vocal that goes from full throated joy to barely whisper, echoing the halting passages and tumbling off the edge.

The Gift (home demo)
Another fine songs that fell through the cracks - full of hope and optimism 'If you look at whose around to this day / every one a gift that you never thought would stay'. 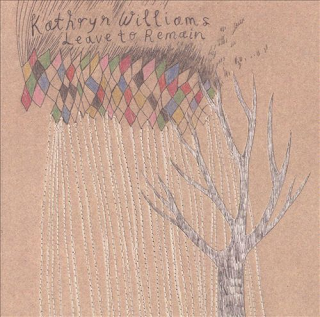 Often described by Kathryn as the first proper love songs that she wrote and it perfectly encompasses that feeling of finding someone you can be yourself with - all your insecurities and fears on display but it doesn't matter. Echoes a bit of another track 'Old Low Light #2'. If there is a finer declaration of the warm enveloping comfort of love that 'I feel like you've turned me into a glass bottom boat / You see everything I hide but still keep me afloat' then I haven't heard it.

Calderstones (home demo)
Apparently written when she was 16 this is the soundtrack to a scene in a coming of age film yet to be made. One of those endless summer days and nights that only exist in your memory. Picking at the grass in the park, talking until dusk, mucking about in your pals old banger, friends becoming something else until the rain send your scurrying for home. It has an inner truth and the 'you and me and everyone' bit will be in your head for weeks 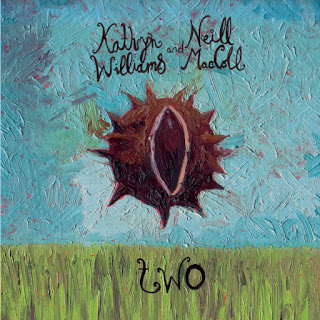 Kathryn's collaboration with Neill MacColl resulted in a large number of songs which spill over onto the bonus CD. The sweetly soporific 'Come With Me' and the delightfully domestic & sweary 'Armchair' are firm favourites but the spiky 'Grey Goes' with its staccato rhythm and woozy feel and abstract lyrics is a standout. A live take amongst the extra tracks shows how far out the song can go.

Just Let Me Go (Unreleased)
A bittersweet song about being able to make your own mistakes
'walk the wrong road, get lost far away, meet the right love and throw it away' underpinned by a harmonium and a suitably melancholy duet. 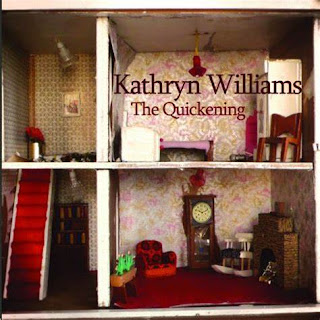 50 White Lines
This song has got me through a few dark nights out on the road when the isolation and anxiety of the encroaching darkness get too much. Not sure if that was the inspiration for the lyric but when I am trying to gather my thoughts and stay on the road I find myself counting the white lines as 'the nerves down my arms hit like sparks'.


Timer (unreleased)
Fittingly the bonus material presented shares the same experimental and adventurous ideas present in the main album. The brittle and playful 'Timer' is short but there's a lot going on in its off kilter percussion, collage of vocals and mysterious tone. 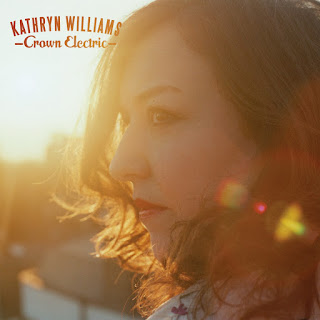 Sequins
Instantly fell in love with 'Sequins' the first time I heard it and for me it's one of Kathryn's finest songs full of honesty, wit and a brilliant production by Ed Harcourt. His work on the album as a whole is great but the chiming piano and the luscious strings take it to another level. On an album concerned with time, aging, life and death - all the good stuff - Sequins sparkles. Musing on heaven and whether the pubs will be open longer 'Heel gets stuck in the crack on the cloud / lightning strikes at the pull of a shoe / if I walk the afterlife with no makeup on I'll be frightening the angels for good' is done with a smile.

Sorrow Flies (Unreleased)
Seriously, how this didn't make the album proper I don't know.
Its such a great vocal, the sunlight banishing shadows and darkness, knowing its will return but making hay in the meantime. Lush strings and bassy bass give this an unbearable poiniancy 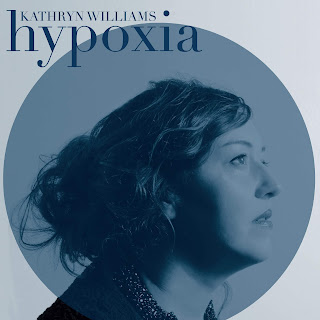 Beating Heart
For me this is the central nervous system of Kathryn's album based on characters in Sylvia Plath's 'The Bell Jar' developed out of a commission by New Writing North. Its the quiet moment of reflection in a storm of emotions, crises, loss, hard life lessons and confusion. The fragility but indestructability of the minds will to survive and endure with a featherlight touch. The final 'I can, I can' which turns into an enquiring 'can I? can I?' is a beautiful summation of the battle at the heart of both novel and album.

The song is based on an incident in Plath's novel where the protagonist, Esther, has a confusing experience in a mirrored elevator where she fails to recognise herself, reflecting her weakening grasp of her own identity. The tour version turns that disintegration up to 11, with double tracked vocals and a more jazzy backing as if emphasising two sides of the same personality. Its an alternate choice of how the song could have been presented.

Packaged with a book of lyrics and another illustrated stories behind the songs and her career - all with Kathryn's own designs and artwork this is a very personal, intimate and tactile release from someone whose music connects with the listener in a very direct and simple way. A perfect place for newbies to start and so much more for double dippers to discover - welcome to her world.

Available to preorder here with signed and special edition extras
and released on 9th August 2019 by One Little Indian
Posted by Dog Faced Boy at 21:34