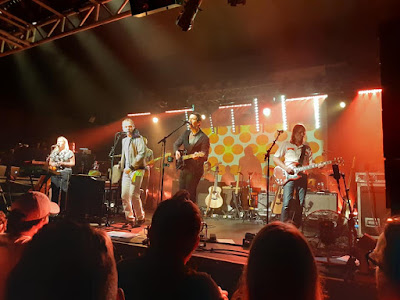 “Twenty two years ago to this very day we were stood on this stage” announced Stuart Murdoch, “how has your life been?”. The last of these small warm up UK shows for a US tour ahead of their Boaty Weekender cruise gave the band a chance to shake the setlist up a bit. Whereas Sheffield & Manchester got a fairly usual set with firm favourites like ‘I’m A Cuckoo’ & ‘Me & The Major’ we in Oxford were shown, what I think sportsball commentators term ‘strength in depth’.
A sizeable chunk of tonight’s set was taken from ‘Fold Your Arms Child, You Walk Like A Peasant’ – a less celebrated entry in their canon and one which I don’t actually own. Then again I’m not a massive fan of one of their most celebrated ‘The Boy With The Arab Strap’ so go figure. I am a bit of a late passenger on the B&S Express – I got on board with The Life Pursuit and worked my way backwards. An acquaintance played me Tigermilk back in 1999 and I have fond memories but I was in a clinic after a nervous breakdown and high on legal drugs so I didn’t trust myself. 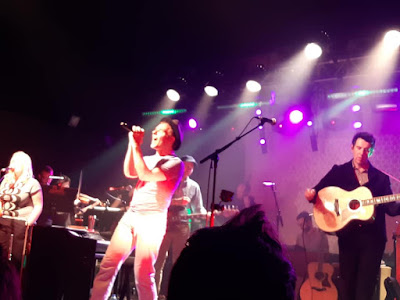 Kicking off with side 1 track 1 of that 1996 debut ‘The State I Am In’ they immediately make their lightness of pop touch look effortless. They have a new album in the fall – The Days Of The Bagnold Summer – a soundtrack to the film of the award winning graphic novel – and the lead track ‘Sister Buddah’ kicks serious amounts of bottom live as guitars jangle, that little refrain gets in your head and Stuarts joyous vocal just soars. After last years slightly lacklustre ‘How To Solve Our Human Problems’ its great to hear them sounding fresher and inspired. 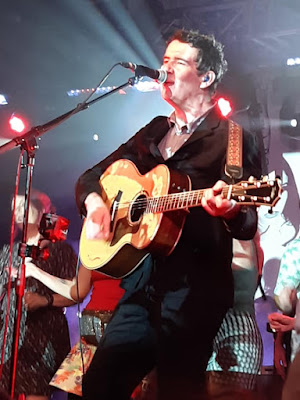 So the beauty of “deep cut” setlists influenced by tweets n mails from the fanbase is that you get to hear devastating songs for the first time that completely floor you – tonight being ‘The Party Line’ from the unloved ‘Fold…’ which relates to a friend of Stuart’s being raped while working at Butlins. Achingly bleak and tragic, a stream of consciousness with anger, fear, shame and helplessness topped off with the closing image ‘Her face was just a smear on the pane’ as she leaves for London on a bus. We did request a really sad song and this just made the world stop for a minute of so.
Not that it bought the evening down as title tracks of ‘If You’re Feeling Sinister’ & ‘Dear catastrophe Waitress’ got us boogieing. Sarah & Stevie got vocal spots with ‘Family Tree’ and a rockin take on ‘Wrong Girl’ before the invited stage invasion for ‘The Boy With The Arab Strap’ & ‘We Are The Sleepyheads’ among the already busy stage with horns n strings augmenting the bands sound. Stuart balancing on the front barrier to make this already intimate show even more so as main set ended with ‘Sleep The Clock Around’ 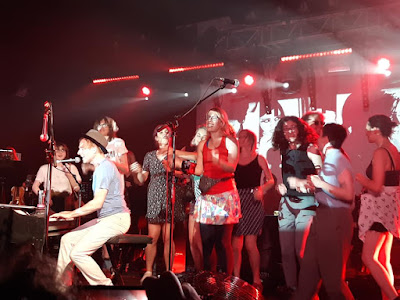 An earlier shouted request for ‘The Blues Are Still Blue’ (“We’re you the person who wrote and asked for that? Cos its been signed, sealed in triplicate that one) is delivered in the encore with their best T Rex stomp and feline grace with some elementary kung fu moves thrown in. A final pick from ‘Fold…’ in ‘Woman’s Realm’ seals a rather brilliant demonstration that 22 years on this band can still surprise and shake your expectations.


The State I Am In Dirty Dream Number Two Sister Buddha She’s Losing It The Model Beyond the Sunrise I Want the World to Stop The Chalet Lines If You’re Feeling Sinister Family Tree The Wrong Girl I Can See Your Future Dear Catastrophe Waitress The Boy With the Arab Strap We Are the Sleepyheads Sleep the Clock Around
Encore: The Blues Are Still Blue Women’s Realm