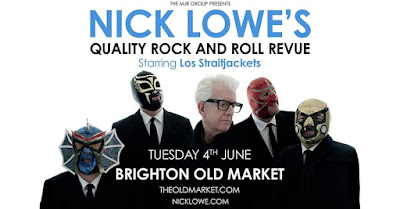 ‘I think there will be something in our repertoire tonight to satisfy even the most jaded of audience members, including those who might only recognise one or two song – probably sung by someone else’ grins new septegenarian Nick Drain Lowe from the low stage of the Brighton Old Market. Despite being many years down the rock n roll road he appears to still be having a whale of a time. Backed by surf garage band Los Straitjackets in their Mexiacan wrestler garb he’s already given his his initial solo statement ‘So It Goes’ (BUY1), ‘Ragin’ Eyes’ and ‘Without Love’ with an effortless grace and cool. 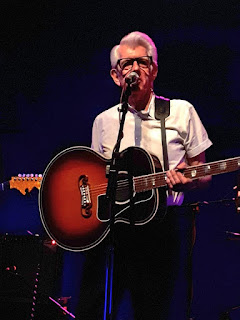 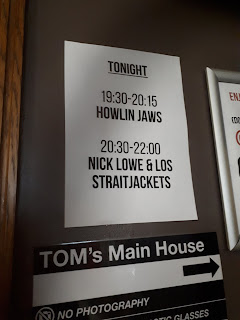 Still whippet thin and in crisp white shirt, this silver fox has left the crooning at home for the most part and got his dancing shoes on. With a new EP ‘Love Starvation’ folowing on from last years ‘Tokyo Bay’ he indeed has songs of all kinds to despense. This aims to be a rather civilised evening – doors open at 7pm, the excellent support set from rockabilly riot Howlin Jaws at 7.30 with Nick done and dusted by 10pm sharp. Which means there is nstill time to grab a drink or three or be home before you turn into a pumpkin
Was particularly delighted to hear Nick play ‘Shting Shtang’ after seeing him many times from one of his finest ‘Party Of One’ with Los Straitjackets providing that tremelo wobble and choppy rock n roll sound. In order to catch breath and change to a more colourful shirt, Nick gives way to a set from his band which sounds like The Ventures recorded by Joe Meek with Dick Dale on buzzsaw guitar. Playing originals like Space Mosquito as well as a beat cover of ‘My heart Will Go On’ they rework ‘I Love The Sound Of Breaking Glass’ as Nick reenters stage right pursued by a beer. 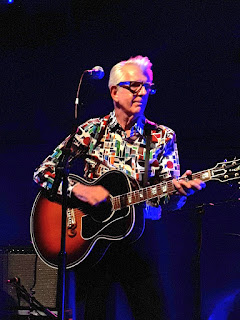 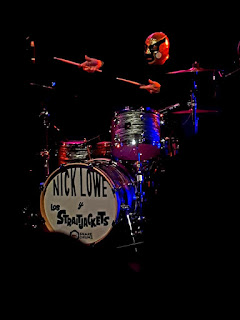 The new songs slip in seemlessly with the country bop of ‘Half A Boy & Half A Man’, Somebody Cares For Me’ – a particular favourite is ‘Raincoat In the River’ which is classic Lowe – shedding the blues for the optimism of rekindled love. But of course ‘Blue On Blue’ takles us back down again. The set ends with the triple treat of the peerless ‘Cruel To be Kind’ with Nick playfully watching how the solo is played and taking notes, ‘Heart Of The City’ and ‘I Knew The Bride’ with a namecheck for the local King Hotel.
Los Straitjackets return for a slam through Batman with some detours before ‘When I Write The Book’ – ‘ please feel free to join in – cos if Rockpile could manage to sing it, so can you’ and PL&U ends with a gracious goodbye wave. If you are going to see him on this tour then I would advise you get there early, not just for the support but also cos the clock on the wall waits for no one.
This Jesus is still cool as fuck - miss him and forever repent your sins