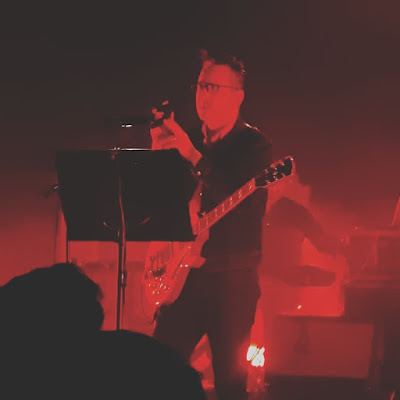 A wag in the audience suggesting they play some old is jovially called a 'see-you-next-Tuesday' before the band launch into 'Tonight The Streets Are Ours' after which Hawley gives the fella a thumbs up and grin. Its been two and a half years but at the opening night of his two night stand in the capital its very much business as usual

EartH, down one end of Stoke Newington High Street, was once a Savoy picturehouse which fell into disuse during the 80s cinema slump, faded into a snooker hall and then pigeon roost & toilet. A multi million pound grant has seen it reopen as a multi use venue although a bar & restaurant tacked on the side is the most obvious sign of where the cash has gone. The actual auditorium is shorn of any fittings, seats or facilities - beer is sold in cans and its £2 to hire a cushion to save your bum chaffing on the stone steps. However as Richard described it as "a bit like us, fucked up but somehow right" its turns out to be an excellent venue with great sound. Its easy to get up close whether sitting and standing and there are no bad sightlines. I truly hope they get the regular business they deserve as London has needed a venue like this since the death of the Astoria. 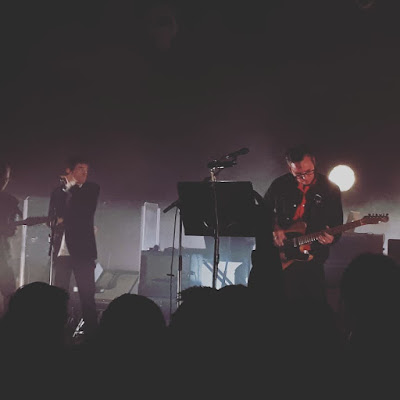 As suggested, Richard Hawley has his new album 'Further' and he plays all of it across an evening that goes from pin drop emotional ballad 'For Your Lover Take Some Time' - "this is the quietest song I ever wrote so if you could talk all the way through it that would be fuckin' mint" he kindly warns - to the psychedelic wig out squalling of 'Down In the Woods' from 'Standing At The Sky's Edge'. Indeed it is the title track of that album early doors that makes you catch your breath as Hawley's rich tones fill the room backed by a droning rolling sound. 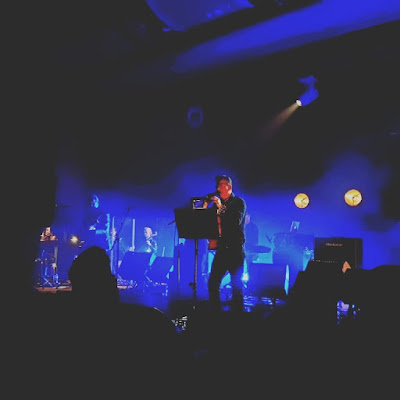 The new material melts in with the old favourites quite seamlessly. 'Coles Corner' topped off with some gorgeously mournful mouth harp from Clive Mellor gives way to 'Midnight Train' which has that same wanting, waiting and everyday wonder that seeps through Richard's work. His regular band is joined by a female string section - "the Lads" - as well as horns. New un' 'Doors' has effortless pop touch and the aforementioned 'For Your Lover' backed by those strings and a lightly plucked guitar is simply sublime. Following that up with the driving guitar led 'Galley Girl' perfectly encapsulates the shifting energy of tonight's set with 'Time Is' being a sprawling beast of a thing. The new album is shaping up to be a belter

The encore opens with Richard's tale of his boy, Danny's 19th birthday, with a storytelling skill and sense of timing which would make any stand up comedian proud in which 'he and his mates, who are, to a man, absolute fuckwits, lovely but fuckwits" all drink 19 tequilas each to celebrate.  The melancholy 'Not Lonely' - "loneliness does mean being on your own" says much about aging, family and the future. A fan tosses a gift up on stage, a 'Fuck Brexit' badge which garners a 'Well you know, I say, fuck all of it' before a suitably moody and defiant 'There's  A Storm Coming' that is, lets face it - a glorious racket.


National bloody treasure - like the venue - ragged but right