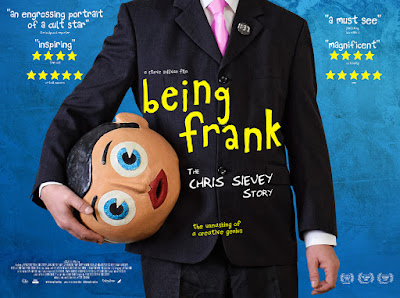 Well I guess no one looks forward to funerals but they are an event where people are remembered and talked about with warmth, honesty and love by those who thought the world of them. Often feel that it would be good for that to happen while the person is still alive. I hope that Chris Sievey felt the great love, respect and gratitude expressed in this excellent documentary by Steve Sullivan before his death in 2010 aged just 54 - still with plenty of fun and nonsense planned.

I first encountered Frank Sidebottom on the British version of MTVs 'Remote Control' quiz presented by Tony "Mr Manchester" Wilson where he was one of the channels that contestants could pick a question from. This was also at a time when Jonathan Ross' chatshow would feature early appearances by Vic & Bob, Higson & Whitehouse plus Jools Holland Hootenany stalwart, Roland Riveron. Despite being given minimal airtime Chris / Frank made an instant strong impression on me with his surreal, childlike wit and imaginative props. His outsized papier mache head cocked to one side he skilfully built up this world for Frank to inhabit which was a skewed version of reality.

The documentary is clearly a labour of love and miraculous distillation of literally days of film, audio and written material. In fact it is a minor miracle that the archive exists as it was rescued at the 11th hour from authorities clearing Chris' old house. That would have been tragedy upon tragedy as a vital record of outsider art would have been lost

Like the unhurried genius that was Ivor Cutler, Frank's talent was built on a particularly individual worldview that we were invited to share. Spurred on by The Beatles ill fated talent scouting Apple project he was fizzing with creative ideas. The mind that creates the worlds first ever computer program released on vinyl should be cherished. His straight ahead pop career was beset by bad luck despite the tunes yet also there seemed a devilish self destruct strain running through his work. His DIY ethic led to him personalising videos and extravagant replies to fan letters.

It's hard to tell from the film how much the success, although limited in terms of the general public, of Frank was an albatross or a useful tool to express himself. His five year plan that was cut short by his death involved using the character of Frank to build up a public profile and then remove the head at his zenith like an unmasked Kendo Nagasaki to emerge as Chris Sievey, musician.

The person that emerges from behind the mask via the documentary however is a wonderfully positive optimistic and enthusiastic soul. He had his demons and vices like we all do but his relationship with his children is a joy as he colours their world with his fantastical adventures. When they reach school age he admits "They aren't mine anymore" cursing the passing of time and relinquishing their minds to the influence of more mundane adults.

Bursting with grainy VHS footage, songs, home movies and intimate moments it's a treasure trove for Frank fans but easily accessible for those who are new to Franksworld. People like Chris Sievey are rare and rarely cherished or acknowledged for their spirit until after they are gone. This film hopefully will give him the recognition that he deserves. For me he stands alongside people like Ivor Cutler & Viv Stanshall - those unable or unwilling to accept the world as it is & try and show us how magic and absurdly funny life can be.