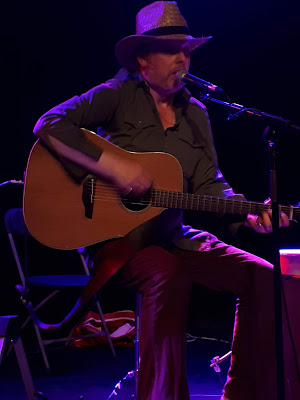 In print and on Twitter, Luke is a caustic and unforgiving man, letting fly with all sorts of misanthropic and scabrous comments on popular culture. However at his sole gig to support his latest fantastical  album 'I Sometimes Dream Of Glue' he is quite self effacing and generous, grinning 'what do you think?' when asked if it's a concept album.

We learn a lot about Glue Town, just off the Westway near Shepherds Bush and its inhabitants and the songs rely on his heady blend of fantasy and sardonic wit. 'I Fell In Love With a OO Scale Wife' for instance. 'She ran back to ma \ back to Twickenham in a dinky car \ She sits on a shelf staring at the stars \ by the biscuit tin \ I travel the world in a midget submarine' - musically somewhere between the coda of 'Strawberry Fields Forever and Syd Barrett's 'Dark Globe'. It is glorious English dreamlike oddness - a lost Clangers soundtrack. His love letter to the Incredible String Band is perfectly at home here. These songs full of subbuteo lads and glue sniffing mix with those from his back catalogue whether it be solo interests - wrestling, Lou Reed, the seventies, childhood dreams. The epic trawl through the 20th century '21st Century Man' is punctuated by 'Junk Shop Clothes' with Luke chiding himself, chuckling at the crimes of his lyrical past.

Earlier he had promised us a Bank Holiday treat, particularly for the wives and partners giving up a sunny Saturday evening to come along and so it was that the baroque pop combo 'Black Box Recorder' took to the stage. 'We're not back on anything" Luke  advised "its just we all live down the road". I was lucky enough to see the band when they briefly reunited a few years back with ace gigs at the much missed Luminaire in Kilburn and the Queen Elizabeth Hall.
It appeared little has changed, Sarah Nixey effortlessly radiating cool detached vibes on 'England Made Me' and 'Child Psychology' - the song that failed to get on the Radio One playlist despite its chorus "Life is unfair \ Kill yourself or get over it". Despite the icy exterior they seemed to having fun with smiles all round before Luke bade us farewell with a  spiky 'Baader Meinhof' echoing to the end. 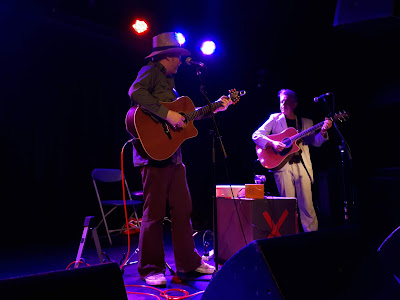 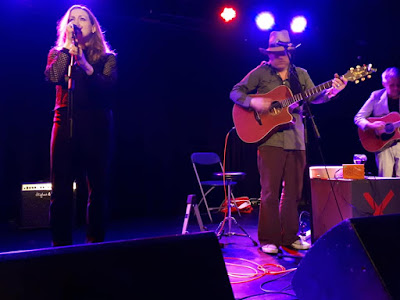 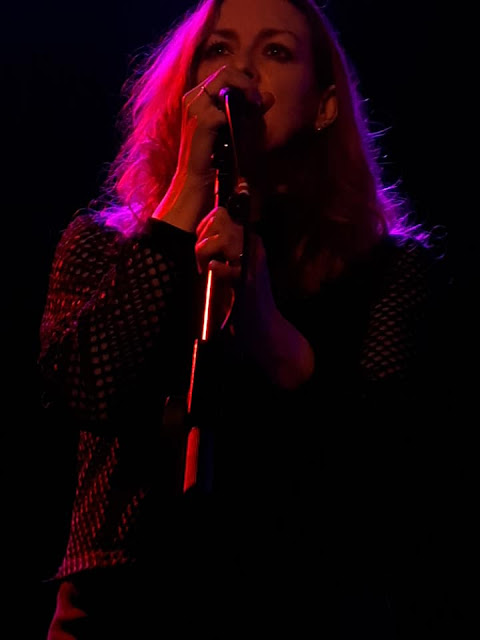 'Don't get the band back together' has been his mantra but with a BBR box set imminent and the quality of those songs it would be a shame if they didn't emerge more often just for shits n giggles.