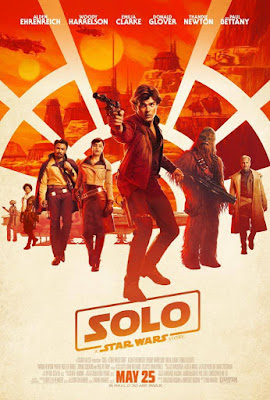 Never has the word "troubled" been used so much about a film in recent times as the latest spin off from the Star Wars behemoth that has loomed over popular culture for more than 40 years now - the origin story of everyone's favourite wisecracking space cowboy - (Han) Solo: A Star Wars Story.

Directors have parted ways \ left by mutual consent \ fallen out over creative choices \ been fired and the film delivered by Hollywood's safest pair of hands, Ron Howard. No doubt scripts have been rejected, casting choices nixed and characters inspected for merchandise possibilities.

It seems to this old nerd that when Star Wars is done right - its when it doesn't take itself too seriously and forgets how it started. The first film has a all the wit, action and subtleness of a 1930's Errol Flynn movie just with a fresh twist. Lightsabres for swords, stormtroopers with poorly aiming blasters for archers , speeder chases rather than on horseback. A clear division of goodies and baddies, whip smart dialogue plus some love interest, twists n switcheroo and set up for further adventures.

I can't recall much about 'The Last Jedi' apart from the humour was flatfooted, the mood funereal (with the late Carrie Fisher's ghost hanging over the whole enterprise) and the characters just a bit dull. OK The Empire Strikes Back is downbeat (cue Clerks clip) but at least it had Lando flirting with Leia, a Muppet pissing about in a swamp and a post affair Ford\Fisher cracking with energy on screen plus a script from Laurence Kasdan. Flip forward 35 years and he writes a solid film with enough little asides to the past \ future for the old fans and plenty of laughs and action for the kids.

Like 'A New Hope' the central hero is possibly the least interesting, Alden Ehrenreich channelling a bit of Ford's portrayal but it's years until we get to the world weary cynical smuggler so he's just a bit ordinary. Its the surrounding cast that elevate the piece whether it be Emilia Clarke turning what is usually a 2D sci-fi trope female role into something far more nuanced or the superbly funny turn by Pheobe Waller Bridge as the voice 'robotist' L3-37 fighting against oppression and injustice to her fellow metal mates. The SFX perfectly capture her physical mannerisms and attitude - it's light years away from the stuffy butlerisms of C3PO.

Donald Glover has the swagger and charm of a young Calrissian, self aggrandising and peacocking his way round the cantinas of the galaxy. Woody Harrelson kinda phones it in as a grizzled father figure, Paul Bettany does his seething evil charm very well but Thandie Newton is woefully underused and barely more than a plot device.

The Kessel Run, meeting Chewie, how Han won the Falcon from Lando and many other little pieces of Star Wars lore that were never meant to be more than a piece of Lucas gobbledegook are bought to the screen but I hope not in a way that excludes the less hardcore fan. I heard little giggles and sounds of satisfaction when they popped up from the less socially capable members of the audience but the film works as a great family action movie in the same way 'A New Hope' did.

You did good, kid. Just don't get cocky