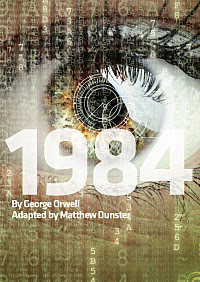 On a bitterly cold snowy night, down a darkened lane we knock loudly on the assigned but resolutely closed wooden door. After some scuffling a bearded figure appears and brusquely enquires “Are you here for the induction?” before we are hurried inside the Ministry Of Truth. After our names and motives are noted we assemble in the Party bar with encouragement to drink Victory gin. The times of the days executions are displayed for our information.
As you may have guessed, Angharad Ormond’s staging of George Orwell’s dystopian benchmark by which all other dystopian or fascist regimes fictional / real have been measured, endlessly parodied and lovingly plagiarised is an immersive experience. Normally these would fill me with dread as I am very much of the “look I paid to see you to the entertaining, not to be a prop” school but the more you go with the world created the more affecting and intense the experience. Those who sit at the front needn’t worry that they will be dragged up into Room 101 in some twisted pantomime but there are plenty of interactive devices deployed to make the audience feel the unease and horror of Airstrip One (aka UK) in Oceania.
The drudgery of life and work is present in the rhythmic choreography recalling Fritz Lang’s ‘Metropolis’ that are such stark contrast to the world of natural beauty lovers Winston and Julia escape surrounded by songs, memories and artefacts of the past. Chloe Ledger as Julia is coquettish, and teasing of the straightjacketed Winston Smith – a figure of his intense love, dreams but also hatred. These dream sequences both waking and walking help us explore Winston’s psyche. Is it perhaps the greatest tragedy that the bright, warm, honest and human Julia portrayed here is to be crushed under the boot of Big Brother’s thought police.
The second half of the piece is largely set in the Ministry Of Love – a nightmareish off kilter asylum where broken people are destroyed or moulded. Martin South as O’Brien perfectly embodies the banality of evil as he lays out the truth as the Party would have it – and that control of that truth, the power of that truth in the minds of the people is all. Paul Grave’s Winston really conveys the painful struggle mentally and physically that is inflicted by the system and that he brings upon himself. The ensemble as other inmates each produce individual representations of the tortured souls and bodies which produce a most realistic environment.
The audience seemed to be fully involved with the event – willing to engage in conversation with in character cast members, taking in the atmosphere and joining in with the interactive elements (some of which I haven’t revealed so they will amuse, surprise and unnerve you as they should) perhaps more than expected but it makes for a unique experience for both. It was double double plus good.
The production really does deliver and powerful and sustained hit to the senses so you feel a real sense of relief when you leave – the bar is no longer full of fear and mistrust but smiles and human warmth of the real world. Although you are reminded, even when in the toilets – Big Brother is watching you*
*not really, this is not a Chuck Berry situation