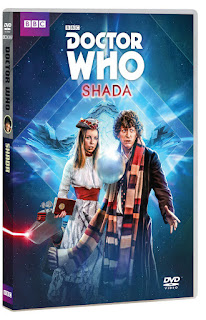 So the most reworked ‘lost’ Doctor Who story ever gets yet another release – since it was cancelled in 1979 due to industrial action it has seen a VHS release with Tom Baker narrating linking material, a flash animation BBC7 version, a novelization, a fan made animation, a Paul McGann fronted audio drama and now this assembly of the existing filmed material with impressive animation.
Most of what was filmed before the strike was on location in and around Cambridge, a location close to the heart of the story’s writer , Douglas Adams. As you’d expect the tale is full of great one liners, proper science and imagination that stretches the BBC budget to it’s limits. Ok he helps them out with having a 100 ft long spaceship that is invisible yet gets great material from it. Quantum theory, time displacement and molecular entropy all get a look in but not as bafflegab , as zinging ideas.
Tom Baker is on top form, delighted to play the silliness and laughs in Douglas’ work rather than dismissing the script as ‘whippet shit’ as he did so often. His assistant, Romana II, Lalla Ward is simply divine and the couple, for that’s what they were by now, were getting on, twinkling at each other.
Christopher Neame plays a mean baddie in Skagra, stomping round modern day Cambridge in a silver cloak without a hint of embarrassment. There is fine comic acting support by Gerald Campion as porter Wilkins and Professor Chronotis (his name a hint to his true origins) is the archetypal dotty don beautiful portrayed by Denis Carey
If you don’t like sci-fi that takes itself too seriously then this is right up your street. Any Whovian or Hitchhiker would be pleased to get this from Santa. And the final scene is a lovely surprise if the internet and newspapers haven’t spoilt it.
I saw it at a special screening at the NFT with many long scarved ladies and gents including Matthew Waterhouse (Adric) and super fan Frank Skinner. To gauge the kind of person there the statement that people who stretch n crop 4:3 images to make them widescreen are Satan got massive cheer.
It is available to download and on DVD/BluRay from 4th December