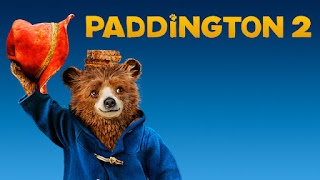 The first Paddington film rather than trampling over a generation’s teatime TV memories was a terrific, warm, affectionate and funny celebration of Britain with anti Brexit & Daily Mail undertones. Was a little worried that the sequel wouldn’t recreate that warm fuzzy feeling inside this big kid.
I can imagine Paddington giving me one of his hard stares for such lack of faith as I happily report that it’s captured the same kindness, fun and flair for bringing some of those illustrations of the 70s TV series to life. There are clever little visual tricks and steps that other family film would not consider – almost a cartoonists eye for storytelling.
Ben Wishaw’s naive tones are perfect for the bear, the Browns suit the stereotypical image of British life as does the tourist view of London. Portobello Road hasn’t looked so clean and tidy since, well, Notting Hill.
Talking of which, Hugh Grant hams up a storm, channelling Patrick Barlow’s deluded thesp Desmond from National Theatre of Brent as the villain of the piece. There are cameos from British comedy talent throughout as well as a great turn by Brendan Gleeson.
The plot involves robberies, chases on trains and backs of dogs, visits to key London landmarks, prison breaks plus be sure to stay for the end credits and a superb musical number. I had a tear in my eye during the final scene – it’s another delicious marmalade sandwich treat for the soulSo
So avoid putting away childish things. This is Christmas Day afternoon full of food n booze and cackling at a sweet, silly and touching tale