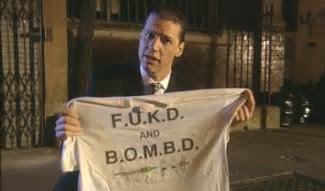 Its pretty fair to say that Chris Morris’ ‘Brasseye’ series arrival in January 1997 was like a bomb going off in my head. I was at university and awaited the series starting the year before for it only to be pulled from the schedules at the last moment. I watched the first episode alone and thought I would die from laughing.

After showing it to my housemates it became a weekly event as the series aired – I have never seen a room of people laugh so much – people were crying, exploding and convulsing – helpless. I am guessing this is how Python hit the student population in the 60s except we often rewatched the show immediately as we had missed lines drowned out by laughter. In the final year of my degree I used Brasseye as the subject of my dissertation. Yes – that’s how I spent your tax dollars, mercifully without tuition fees.
Oxide Ghosts is an hour of cream from series director Michael Cummings box of mouldy old VHS tapes featuring 70 hours of often timecoded, film and studio rushes. He has assembled a documentary that attempts to show a little of the one off man mental behind the curtain plus some of the material that didn’t make the legal or physical edit. The only thing I can compare it to for a comedy fan like me is watching Bob Dylan recording session of one of your favourite albums and getting the false starts, the goofy bits, lost verses and music plus him explaining how he wrote some of the song.
So we get an extended section of the infamous Peter Sutcliffe Musical that was hinted at on the DVD complete with a song. The Reggie Kray call which earned them a visit from “one of the boys”, extra bits of Cake, Chris inadvertently making an elephant piss itself, more bothering of drug dealers whilst in nappy and space hopper hat. A couple of things didn’t really work and were trying too hard to be tasteless but I laughed constantly and loudly throughout
There was also a real thrill of seeing Chris Morris break character or just burst out laughing as he’s cultivated this image of being serious and remote, rarely does interviews or explains himself. Extended versions of broadcast scenes demonstrated his improvisational skills and his commitment to his art.
The film was followed by a Q&A with Cummings where he expanded a bit more on how he put the film together, that Toyah was the only celebrity who refused to read out the nonsense they gave her to say, how they could never do the show today mostly thanks to the loopholes closed up as the result of their duping skills. He was clearly delighted that 20 years on the show is still remembered and celebrated but wonders if some news programme makers who aped its bombastic style knew that it was supposed to be a joke.
The only way you will ever see this film is at screenings like the one I attended with 200 other fans. Chris saw and approved of the footage being seen but he and Cummings believe that in a world where everything is available at the click of a mouse that the film should be something you have to get off your backside and go see. Screenings are beings held all over the UK and Ireland for as long as there are people who want to see it.