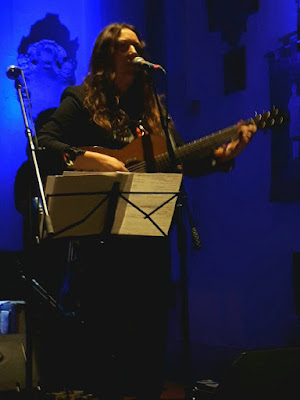 Good albums can last a summer, great albums stay in the car for longer than most – brilliant albums last for a lifetime. Kathryn mused between songs last night that ‘Fell Down Fast’ written after the death of a friend has been in the world longer than he was. The album ‘Little Black Numbers from 2000 which always will be linked to the phrase ‘Mercury nominated’ was given a fine revival in a small packed North London chapel.
You know those sound bites about ‘x song or x record saved my life’ – well LBN truly did on more than one occasion. It’s transcendent grace and stillness (Hello pseuds corner) have been a raft that I’ve sprawled exhausted on more times than I care to mention. Beaten by anxiety, loneliness and depression I’ve held onto Kathryn’s voice and the music for comfort, reassurance and hope. Although it’s not just linked to sad times – great joy of dancing about to the coda of ‘We Dug A Hole’ and what always sounds like dogs barking to me. The album is quiet, reflective but not unadventurous in terms of arrangements and melody.
The band Kathryn had assembled to play many of these tunes for the first time in 15 years did not display any signs of the lack of rehearsal Kathryn hinted at but that’s cos she attracts supremely talented players. Her friend and partner in onstage giggling, Michele Stodart played a blinder as ever and Kathryn’s voice showed little effect of a bout of flu that caused a Lemsip binge pre show.
Despite the lack of a break to “turn over the record” (which Robyn Hitchcock always used to do at his charity album shows) the songs were played in order ending with a gorgeous ‘We Came Down From The Trees.
Kathryn performs Little Black Numbers – the song which didn’t appear on the album of the same name – as an encore, solo acapella using live looped vocals. Back in the early days she used to hold onto the sampler and clunkily (cos it was clunky) layer her voice. Now she effortlessly does so and puts so much care, emotion and drama into creating this incredible mosaic of sound.
A closing ‘Bird On A Wire’ is a fitting ending as it perhaps reflects for Kathryn music that has stayed with her, bringing joy, solace and meaning to this damn stupid old world as the album she performed tonight meant to the audience.