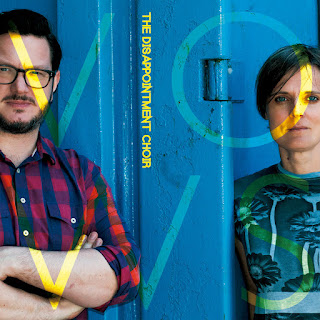 There’s a saying ‘if your friends aren’t going to tell you that you stink then who will?’. This really misunderstands the nature of true friendship as you expect those you like to be honest with you even if it hurts a bit. This is a roundabout way of declaring that two of my friends made this record, no not Facebook friends or people you know off Twitter. They are people I have met, occasionally looked in the eye (it’s a phobia of mine and I should try harder) and traded Blackadder quotes with. Yet I also want to make clear that doesn’t mean this is me doing them a favour or a solicited review. I’m doing it because I have always supported the artistic endeavours of my pals because so many sit on their fat spotty behinds while some take a risk on their talents. So with that all clear, on to ‘Vows’ the second album from The Disappointment Choir
It kicks off with a bloody synth earworm that ver League wouldn’t have minded having back in the day a little pop gem with Katy n Bob’s voices weaving a bit of free advice if you’re thinking of dating that damaged person that’s otherwise lovely – don’t – delivered as strings swirl and bells chime in a happy counterpoint to the bad news. ‘1971’ kicks out at nostalgia, an inability to accept that the past isn’t the only place where fun and excitement exist plus just maybe the new isn’t as scary as your own prejudices would suggest. Can’t imagine where the inspiration for that song lies.
I’m always fascinated by song writing and what makes something memorable, the sounds and moments that leap out at you, drawing you in and, for example, the quiet power of ‘Need Someone’ to recreate that feeling you get when someone takes your breath away. Yet also the wish that others see us that way too – getting to the heart of the matter.
Saying that the songs on the album don’t outstay their welcome isn’t meant as a negative. There is no labouring of a point, guitar solos, no funk workouts getting in the way of the real emotions. The album is quite varied in sounds and style but maintains a mix of the old and new. OK that may suggest that today’s musicians are just recycling the sounds of early electro pop but I think that give the album a broader appeal. It’s not really trying to be either of those things but whether you are 14 or 44 the energy of ‘Vows’ will send a message to your pleasure centres.
‘Heartstrings’ would, I guess, in the olden days of the record industry, be the single and it’s a great taster for the album as a whole. If this don’t get you tapping an appreciative toe, frugging in the queue at Waitrose or slapping the steering wheel in the morning commute as you sing along to its bittersweet chorus then you are lost. The drops of Lightning Seed magic in ‘I Am Awake’ as the machine skitters and slides across your consciousness not your bag either? Shame.
What I am clumsily trying to say is that if you love pop music, that annoying stuff that made generations sing, dance, bonded them together and spoke about love, loss and the human condition then you will find lots to enjoy here. There is introspection, its not superficial and disposable but neither is it morose and pained. Sad things are expressed in front of beautiful backdrops of sound like ‘Winter Hill’ but there is hope everywhere. And I sort of need that kind of thing in my life sometimes.
Although Bob takes the majority of the main vocals, Katy provides great harmony, a great vocal sparring partner on the duets and on ‘Centre Of The World’ she really shines with a real aching longing in her voice. Their vocals meshing really make this record but often it’s Katy’s ghostly vocal shimmering, like on the aforementioned ‘Winter Hill’, that catches the ear.
Pop songs with inventive arrangements that linger long after the stop button has been pressed. For pop kids of all ages – this is good for banishing those winter blues.
And just for the record – neither have personal hygiene problems as far as I am aware