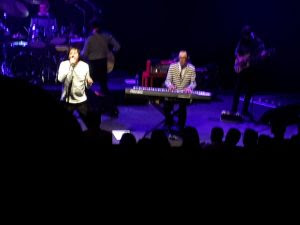 Having left the physical jerks to his brother and lead singer, Russell, the otherwise keyboard squatting Ron removes his jacket and walks centre stage during the euro disco throb of ‘No.1 Song In Heaven’. After a short pause he breaks into a loping monkey dance across the front of the stage as the place goes nuts and roars its approval. Sparks have come home.
Throughout the show the brothers Mael refer to the capital and venue as dear to them while their appreciation of tonight’s enthusiastic devoted response is humble and heartfelt. As is their usual style they have a brand spanking new album and boy are you gonna be hearing a lot of it. Rightfully proud of Top 10 smash ‘Hippopotamus’ and it’s gloriously daft title track which, as my pal Spencer correctly suggested sounds like twisted song by the Oompah-Lumpahs, makes up a sizeable chunk of tonight.s show.
Sure there are plenty of hits and deep cuts performed with ceiling scraping falsetto and theatrical showmanship as the young band are fleetfooted and delicate when needed and a thunderous version of Quadrophenia era Who during the delightfully OTT ‘Dick Around.
There were many time during the evening when I gaffawed at a funny line hitting me just so or had a big grin across my chops at the sheer unique vibe with which Sparks fill a room. All the reasons someone may find to despise them is why we fans adore them. ‘This Town…’ is delivered with the same commitment and energy as if it was their new single. This is a band that loves those past glories but are about now, the future that they always seem to represent.
The two men have a combined age of 140 but the drive and energy of teenagers. We shall not see their like again so treasure them while you can