You'll be hearing from me baby, long after I'm gone
I'll be speaking to you sweetly
From a window in the Tower of Song
In 2016, aka the year of the great pop culture extinction, we lost a seemingly never ending swathe of precious talents. When David Bowie and Prince left the shock lead to impromptu and planned musical tributes of varying quality. When Leonard Norman Cohen passed in November the reaction was more of quiet respect and acceptance of a good innings, well played. Tonight's concert in conjunction with Camden Town's excellent Green Note venue and curated by Kathryn Williams tried to give a flavour of the wisdom, poetry, insight and, yes, humour of the man.

Interspersed by readings of his poetry, his prose and his witticisms in interviews from Mr Shale, echoing Cohen's deep sandpaper drawl Kathryn had called in friends, collaborators and fellow Len fans to present not carbon copies of well known tunes but with arrangements that threw fresh light on old ideas.

I've been an admirer of Ren Harvieu's stunning voice through appearances with Romeo Stodart at venues across the capital and early on her sultry take on 'Chelsea Hotel' set the high standard for tonight's show. At the Union Chapel's Flying Seagull benefit she and Romeo performed a dramatic version of 'The Partisan' which he repeated tonight with fellow Magic Number, Angela Gannon creating a real chill. The third Number, Michele had the unenviable task of taking on perhaps Leonard's most iconic song 'Suzanna' that reverberated around a million bedsits as pale young boys failed to get off with pale willowy girls.


Like Leonard's own live shows a choir of 'Angels' provided soothing backing vocals and call and response when Ed Harcourt stepped up to growl about 'The Future'. His voice fits these songs like a glove 'from his 80's electro period' and the band grooved brilliantly anchored by Michele Stodart's mercurial bass and foot stamps. Curator Kathryn Williams, closed the first half out with a moving 'Hey That's No Way To Say Goodbye'

What I particularly enjoyed was discovering new elements to Leonard's life that I wasn't aware of. I'm a fairly recent convert to his work, luckily I got to see the man live at one magical night in Brighton where he made a 5,000 seater feel like a tiny room like the one we were in tonight. Kerry read a section from Cohen's first novel, the semi autobiographical 'The Favourite Game' - a funny, poignant tale of dancing, teenage insecurity and comic pain. Even his interviews sounded like poetry, although his estate should get Mr Shale to do audiobook versions of his prose as he really bought the tales to life. Romeo and I would buy that for a dollar for sure.

This all helped create a more rounded and different experience for both performers and audience that your run of the mill tribute show wouldn't have touched on. Astrid Williamson performed a song not by but about Leonard by one time squeeze Joni Mitchell (course he did, the lucky blighter) 'Rainy Night House' from Ladies Of The Canyon. Cohen's admiration of Federico Garcia Lorca was represented with 'Ballad Of the Moon' spellbindingly sung in Spanish by Sylvie Lewis.

My personal highlight was the central section of the second half with Ren Harvieu, Romeo & Michele Stodart flowing on what felt like a telepathic energy during 'Famous Blue Raincoat' (which I suddenly realised refers to Cohen's experience with Scientology). Michele picked a song from the albums he recorded when he came back down from the mountain 'Crazy To Love You' which I admit I'd not noticed the gold in before hearing her perform it.

The real standout for me was Angela Bannon's reworking of 'Tower Of Song' - simply breath-taking. Shorn of its familiar female backing vocals it became a bare country song akin to that of Hank Williams who features in the lyric. From the running order below it appears this was a last minute addition to the set and I am so grateful it was. 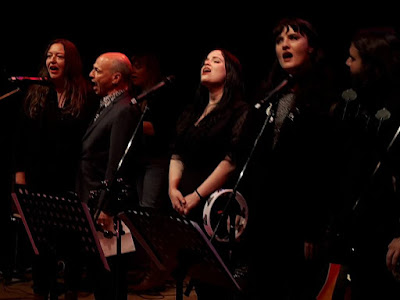 Kathryn spoken movingly before 'Bird On A Wire' of how she recorded songs in her bedroom and sent them on cassette to the shop near the monastery where Leonard was living in the hope they might pass them on to him. That she heard about his passing while on the road, performing music all those years after he helped spark her career obviously guided her in piecing this celebration of his life together. A communal chorus of 'Marianne' beautifully led by Polly Paulusma and THAT SONG sealed a rather special night. Your correspondent was lucky enough to squeeze in to the sold out show at the last minute so stood for 2 1\4 hours, witnessing a loving and fitting tribute by some of my favourite musicians. 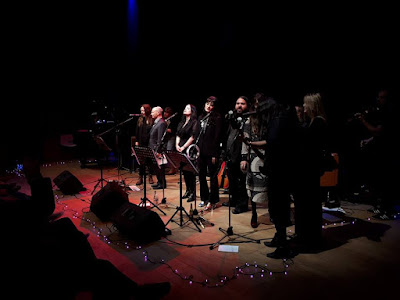 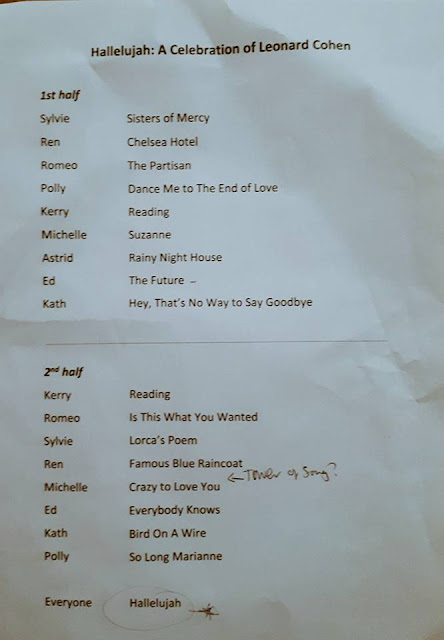