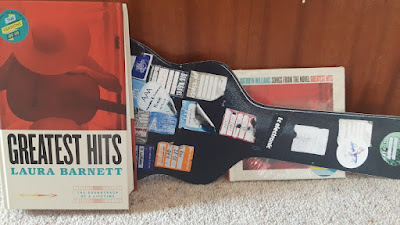 This blog so often features reviews and bits on Kathryn Williams that it might as well be a fanpage. Well as her stalker of 18 years it's often her music that moves me to put fingers to keyboard during even my lowest times. Recently has been the nastiest of times - periods of self loathing, self harm and just feeling sad in the most exhausting of ways.

I was lucky enough to get a sneak preview of Kathryn's new album 'Songs From The Novel "Greatest Hits"' and so have been living with it a while now. It's gone from something that I was really unsure about to a moving and delightful record which is up there with Kathryn's best work.

I've been here before.

Although the concept behind this project with novelist Laura Barnett that sees an imaginary musical life bought to life for the protagonist of her novel, Cass Wheeler is unique it's not the first time one of my faves has hooked up in this way. In 2010 Ben Folds and Nick Hornby released 'Lonely Avenue' - a collaboration where Nick took ideas he had as short stories and wrote them as songs which Folds then took and put to music - jamming different arrangements with his band until they got what was wanted. Although the songs - unsurprisingly - were pretty strongly narrative driven they were not autobiographical.

For some reason I was really unsure about the record and Hornby's involvement. Don't get me wrong, when I first read his novel, 'Hi Fidelity' I thought he had crawled into my head, intensified by being a fellow Costello obsessive. I think it's because Ben's material is often deeply personal and dragged from his life experiences in often naked ways I didn't want to hear him parroting someone else's thoughts. A strange kind of jealousy I suppose which ignored the fact that he didn't write some of my favourite Ben Folds Five songs. However on listening the album quickly became one of my favourites not just by Ben Folds but by anyone. It's such a varied and interesting listen - 'Password' exploring obsession via linguistic tricks, 'Belinda' sees a singer songwriter haunted by his hit song and a past that is always present and 'Claire's Ninth' divorce from the point of view of a child who just wants to have a normal birthday.

Ashamed to say that I had a bit of that same feeling when I clicked the play button for the stream of Kathryn's album. I didn't mind if I thought it was no good, more that I did't want it to be a diluted version of what makes Kathryn great. In other words - I was being a total dick and not trusting Kathryn, Laura and her musical wunder-band to produces something unique.

The 16 songs are meant to cover Cass' career from the late 60's\ early 70s folk/blues/psyche boom through the era of the singer songwriter to reflection of heartbreak, loss and rebirth that feature in the latter part of her life. She is sitting at age 65, on the cusp of a slight return, putting together a "best of" collection and the songs reflect the memories they unlock. Rather than being a collection of Kathryn's songs it is her channelling the feelings and thoughts of Cass Wheeler. It's no more unusual than the alter egos that Bowie often inhabited but without the need for as much makeup and lycra.


A key ingredient is the arrangements which delicately echo the sound of a particular musical era without being a pastiche or impression of an artist. 'She Wears A Dress' has a Motown disco shimmy to the soul of its dancing shoes with great brass accompaniment. 'Living Free' can't help but conjure up the Californian coast, the wide Pacific glistening as you cruise down a windy road like in the movies - you can taste the salty air. The synthpop of 'Architect' has a sparse, airless feel, Kathryn's detached vocal undercut by a genuine laugh as she imitates the woozy backing. 'In This Garden' sounds like something but I can't quite put my finger on but its more a feeling than a band and that's the point. The grinding fuzzy rock energy of 'Road Of Shadows' and its infectious 'knocking down miles like dominoes' refrain is perhaps less familiar territory for Kathryn but she pulls off the sassy snarl with ease.

Kathryn puts the albums' "feel" down to producer Romeo Stodart of The Magic Numbers but aside from that he brings the best out of Kathryn's performance several times through his playing. Originally in the novel, Cass composes 'Edge Of The World' on guitar but in the studio, Romeo performing the song on piano caused a quick rewrite by Laura. It may be the stand-out track on the album - a genuine spine tingling moment occurs at its close where Kathryn's voice soars higher and higher until it cracks and dissolves, Romeo playing subtle and sometimes unexpected, unusual notes reflecting the sense of loss before Kathryn's voice, as if arcing back into the world to moan it's 'the sea, the sea' coda as piano tumbles and washes over you. It's simply breathtaking in the most literal sense of that word.

From the fun, innocent vibe of 'Just Us Two' with it's penny whistle interjecting like a Clanger on BV's, the wistful mother daughter dialogue in 'Queen Of The Snow' and the seductive jazzy tones that slink through 'I Wrote You A Love Song' with Romeo taking on the mantle of Cass' boyfriend and guitarist, Ivor Tait, from the novel this feels like a collection from different times and places.
Long time friends and musical companions Michelle Stodart, Kate St John and Neill MacColl among others have helped create something not only unique in concept but pretty damn special in it's own right.

I can't say if the album is better understood or appreciated after or while you are reading Laura' accompanying novel. The reason being that I heard the album many times before I got my hands on the book. I found the book a genuine minute melter, I devoured it, perhaps rightly, in a single day and enjoyed it immensely. Where other books about fictional musicians can be heavy handed, this had a subtle touch and felt right, from the reality of low level touring in the early 70s to the band names - 'Heavy Elements' , 'Vertical Heights' & 'The Puritan Experience' which I'm sure she had fun dreaming up.
Of course the novel gives the songs more context and crosses a few t's but despite intertwining they stand on their own merits.
So why not buy both?

The album ends with 'When The Morning Comes' which is the most "Kath" rather than Cass track on the album - a sweet and loving acoustic lullaby to waking which features those Williams buzzwords "darkness" & "light" but it also feels part of Cass' story and a suitable exit.


On a side note this week I have been mostly staying alone at a travel tavern at the side of an A-road near Ipswich for work. My anxiety has been particularly high and its been a real struggle, particularly late at night to prevent myself from falling headlong into a full panic attack. Lying back, big old headphones on, I lost myself in Kathryn, Laura and Cass' world, managing to become calmer and cope. So for that alone, I give thanks.