AKA I Saw You Standing There With A Bootleg In Your Hand.

Beatle Paul had a variable 1980's - kicking off with the drugs bust and the death of his teenage best friend \ nemesis \ rival, John within the first 12 months, followed by a technical nightmare live appearance at Live Aid, Ebony & Ivory, Give My Regards To Broad Street, the 'Press To Play album, losing out owning The Beatles catalogue to Michael Jackson, the theme song for 'Spies Like Us' and - no I'm not going to say "The Frog Song" because a) it's called 'We All Stand Together' and b) it's a fucking brilliant children's song.

On the other hand - a memorable video for 'Pipes Of Peace', 'Coming Up' with its fab multi-Paul promo, Take It Away, Wanderlust, No More Lonely Nights, the inventive McCartney II album, Here Today, Choba B CCCP and a triumphant live return at the end of the decade off the back of one of his most successful and critically acclaimed albums in years - 1989's 'Flowers In The Dirt'. Paul's reissue projects slightly haphazard sequencing lands there this month with a 2 CD, 2LP and a 3CD & 1 DVD Deluxe Edition with a lavish book stuffed with photos, lyrics and other ephemera. The central feature of all the various editions are the demos and sessions recorded with Elvis Costello in 1987 with the songs ending up on the album, Elvis' own records or remaining unreleased....until now. 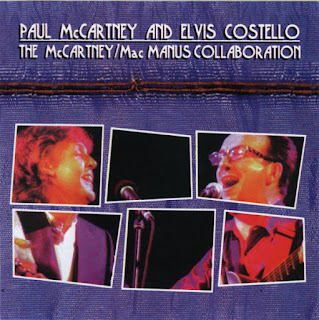 For in 1998, the prolific bootleg label Vigotone who published Beatles and solo Fabs titles a-plenty dropped 'The McCartney McManus Collaboration. a single CD featuring 8 out of 9 demos from that initial 1987 session plus various Paul and Beatle related chunks live and on disc. This includes a rare appearance of the pair onstage performing 'Mistress & Maid', another co-penned song that featured on 'Off The Ground' alongside a fun romp through 'One After 909'. There is some piracy with officially released material making up the numbers but it all helps to give a well rounded picture to their short working time together and Declan's fondness for Paul's 60's band.

Listening to the official release of the full eight 1987 demos next to the bootleg there is no discernible difference, maybe a little tweaking in volume but it's a work in progress guide with all the flaws of what was meant to be a private record. 'Twenty Fine Fingers' works so much better here as an acoustic little bit of rock n roll fluff that you wish Macca had just left as is. 'Tommy's Coming Home's tale of a widowed fresh wartime bride is very Elvis and I've always liked that 'a broker awoke her from a fitful slumber' lyric.

A large section of the interviews for the project discuss how EC and PM wrote together and how they found the experience which is fascinating stuff. Macca often says that critics latched on to a remark he made about how their writing sessions felt like when he wrote with Lennon which made him uncomfortable but it's clear that Elvis wasn't afraid to push at his hero when he felt it was needed.
The handwritten lyrics & doodles in the accompanying book seem to suggest that the songs were perhaps more or less solo written with some small alterations. A letter from 'Elvis The C' to 'Mr Ramone' underlines the former's keenness to continue their collaboration and there is some great detail on how they came to collaborate and how it panned out.

The demo for 'You Want Her Too' has far more bite and bile than the version that ended up on the finished record with Elvis audibly spitting the line 'So why don't you come right out and say it, stupid?' like a snarky Scouse scally. 'That Day Is Done' retains some of that real Aretha tinge that got lost in the production. It is suggested, although not here, that Elvis and Macca clashed over the album's sound with Paul not sharing Costello's vision of a more stripped back approach. Slightly ironic as both of Elvis' albums around this time 'Spike' & 'Mighty Like A Rose' are often criticised for being too 'busy' production wise. Elvis perhaps got the song to sound his way when he recorded it with The Fairfield Four vocal group for their 1997 'I Couldn't Hear Nobody Pray' album

One last Elvis mention and then I'll talk about Paul McCartney in this review of a Paul McCartney release. I have never liked 'Playboy To A Man' which eventually surfaced on 1991's 'Mighty Like A Rose'. Costello's vocal is shrill and at times painful and the demo bears out that it's clearly more suited to the Little Richard yelps and scream of the artist once known as Paul Ramon.

Also here are demos of 'Shallow Grave' , the aforementioned Mistress & Maid and 'I Don't Want To Confess' although irritatingly, along with the 1988 sessions with his band alongside Elvis these are only included on the deluxe set and that controversial download only section of the set. All of that would easily fit on a single CD giving the hardcore as well as casual fan a real insight into the making of the album. As it is unless you go all in on this release you don't get the full picture.

The controversy about the b-sides and other previously released mixes being download only (and that bloody cassette) gets in the way of the main issue - who is this for? The devoted may buy it whatever, it looks nice on the shelf next to the rest but they are really getting very little bang for their buck. The casual fan may not have heard the bootlegged demos and may be nonplussed by the slightly low fi quality.
McCartney has mused that it would be interesting if The Beatles session tapes were released in heir entirety so we could hear how those songs came together - wars and all. Yet his own solo output appears to have an eye on creating a blemish free photo-shopped and overly expensive image.

The book that comes with the set has exclusive photos by the lovely Linda that have an intimacy, access and skill that few others could hope to achieve but like the music section there is a lot of wasted blank space. Macca's peace and love ethos doesn't seem to extend to the world's tree population. Yes, I'm sure it's printed on the best recycled paper but I feel the music takes a back seat here. 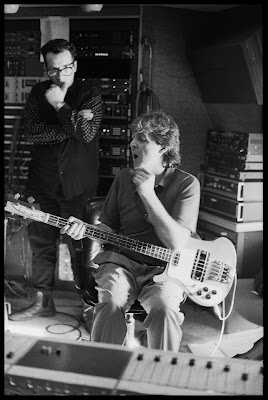 As an album, Flowers In The Dirt, has a similar feel to another of that year by a fellow 60's survivor, Bob Dylan's 'Oh Mercy' in that it's someone who has been leaning on old familiar ways for too long and a younger artist gives them a kick up the arse. That might be simplistic but if only for the suggestion that Paul dig out his Hofner bass from the MPL vaults, take him back to the beginning of his song-writing then giving him a fresh outlook, the album is a success. Aside from the songs and singles already mentioned - 'Distractions' is the effortlessly wistful chugging ballad with artful arrangements that Paul excels at. 'Rough Ride' tries too hard with it's funky slap bass, electronic drums and whooping to sound down with the Madchester lot. And the album should have finished with the appropriate 'That Day Is Done', the remaining two (or three) songs feel superfluous.

The deluxe version of FITD is currently £135 quid from the Tax Dodgers which for 3 barely half full CDs, a DVD of home movies, mp3 download and a coffee table book is quite steep. In comparison the deluxe version of Nick Cave's career retrospective with similar music, DVD and book count is more than half that amount (or a third if you got in quick). OK it's Paul bloody McCartney and not the Aussie goth king but still.

Before I heard the deluxe version, just on the contents listing, I would have recommend you go with the 2CD edition and I still do.  You get the main meat of the set but you deserve more and it's not worth the upgrade. Box sets are moving more towards catering to the uberfan who wants all their pudding at once until they are sick. This just feels old hat - it even has a hidden track on the CD for all you 90's kids - and if this isn't aimed at me (a fan of both PM & EC) then, I ask once more, who is it for?