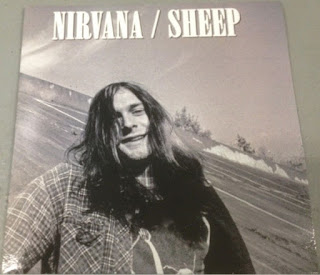 So in an alternate 1991 – probably visited at some point by Marty McFly in a DeLorean – Nirvana released their second album for the SubPop label – ‘Sheep’. Kurt Cobain, Krist Novoselic & Chad Channing select Butch Vig to produce the majority of the release which garners positive reviews in the music weeklies. Due to SubPop’s ongoing distribution and marketing problems, it barely equals the 40,000 sales of ‘Bleach’. Channing quit the band with the remaining members attempting to recruit ex Scream tubthumper Dave Grohl but losing him to Pearl Jam……

Back in our timeline – April 1990 at Smart Studios, Madison, Wisconsin, Nirvana recorded 8 songs for their proposed second album on the SubPop label but these tracks would be used by the band to score a new deal with a major label. Naturally once Channing was replaced with Grohl, the material was re-recorded although the arrangements and lyrics often remained the same. With the addition of other tracks from the period this bootleg album attempts to give a taste of what was lost. All of the tracks are now officially available – scattered across the CDs and box sets – but this track-list is seemingly based on scrawl in Cobain’s posthumously published journals. 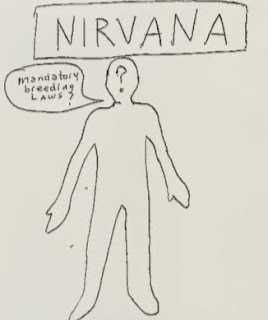 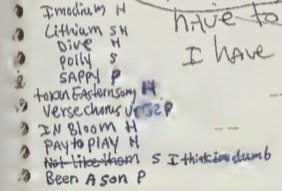 The versions here aren’t necessarily “worse” or “better” than what ended up as Nevermind – the whole feel is punkier and looser, it’s more the sound of a band in a room than the airless final NM mix. The performance of Polly actually ended up being used on the finished album as there is real magic at work on that recording. However what is clear is Chad Channing’s limitations as a drummer fail to make the songs really punch through like Grohl does. He often gets the beat but not the feeling, the attack is missing, it’s not just Grohl’s power but his dynamics.

Despite that, ‘Imodium’, or ‘Breed’ as it would become, is a powerful sound – a roaring snarling bugger from the off. Sliver lacks the urgency of the later live versions with Reading 1992 being a particular favourite of mine with Kurt veering from goofing off to primal screaming. You often hear bands talk about their “sound” not being right until they were all in a room together, that magic extra member. Well that in evidence here but also the “loud-quiet-loud” Pixies trick is less in evidence too.

There is a punk 101 conventionality to how ‘In Bloom’ is here as that orgasmic rush is faked. It’s still puzzling how ‘Sappy’ never made it onto a Nirvana release while they were active, only as a hidden track on an AIDS benefit compilation. It’s likely that their cover of the Velvet’s ‘Here She Comes Now’ would probably never have feature on the 2nd SubPop album but its a great version with Kurt doing a spot on Reed drawl. I just find this stuff a fascinating alternate view. Artists hate studio bootlegs or even reissues because it lays their sketches bare (REM voiced such concerns over the ‘Out Of Time’ demo CD) as well as prevents them deciding how their work should be heard. For us obsessive or devoted nutjobs its like seeing a 1st go at the Mona Lisa or a rough cut of ‘Citizen Kane’ – it adds to not subtracts the magic therein. 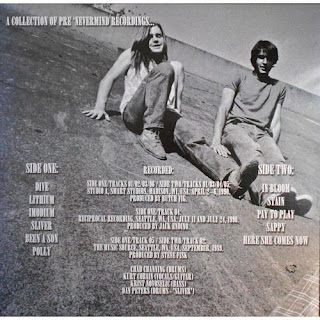 As I said, all these tracks are available legally but if you do happen to see this particular release floating at a record fair or market near you then I’d recommend it. Well mastered and mixed, ace cover art and the sort of thing you’d expect a record label would have done themselves by now. Lazy bastards.

In that alternate 2017 maybe Krist is working for the UN, Dave is playing with Tom Petty & The Heartbreakers and Kurt a self published poet and outsider artist. The grass is greener over here

Side 1:
Dive
Lithium
Imodium (Breed)
Sliver
Been A Son
Polly

Side 2:
In Bloom
Stain
Pay To Play (aka Stay Away)
Sappy
Here She Comes Now
Posted by Dog Faced Boy at 22:18