The Dark Of The Matinee 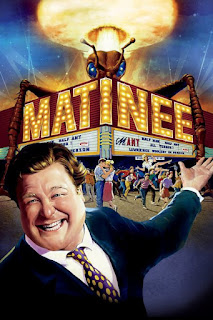 At the moment the film world is going ga-ga over 'La La Land' : a movie that celebrates the golden age of the Hollywood musical. Awards are raining down on it like Gene Kelly pirouetting in a freak shower proving critics and studios alike love little more than a good navel gaze. Yet in 1993 Joe Dante's 'Matinee' paid homage with equal love and nostalgia to an equally beloved era of film-making: the 50's B-movie that was staple of the Saturday morning matinee.

The film didn't do great business in 1993, critics were lukewarm, the studio wre sure how to sell it and it sort of sunk without trace despite having a similar vibe as Dante's 'Gremlins' with an equally great score from Jerry Goldsmith. The backdrop of the main action is the 1962 Cuban Missile Crisis as the world stands on the brink of destruction, adults panic buy Shredded Wheat and boys think "If the world was gonna end, do you think that pretty girl in class would put out?" With such tension and fear in the air, the last of the celluloid showmen sees a chance to revive his flagging fortunes. 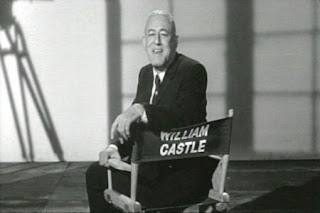 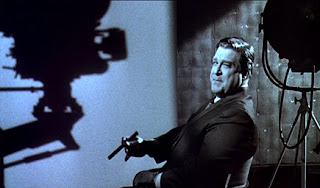 John Goodman's cigar chomping director and entrepreneur,  Lawrence Woolsey, is 20% Hitchcock with beautifully observed personalized trailers but 80% William Castle - a true imaginator who took Hitchcock's eye of film promotion and turned it up to 11. Patrons would be given life insurance certificates in case of being frightened to death, nurses and hearses would be on standby, a 'Cowards Corner' bathed in yellow light where


audience members could flee, skeletons on wires, actors in the auditorium and other gimmicks.

Most infamously he placed devices in cinema seats for 'The Tingler' which would be activated whenever the monster appeared on screen, causing random audience members to scream and jump out of their skins. This is just the sort of mischievousness that would fire the imagination of future schlock king John Waters.

At the heart of the film are fantastic performances from a young cast - new kid in town thrilled by Woolsey's tricks, a socially conscious nerdette, a sexually precocious nymphet with psycho boyfriend and wide eyed kid brother. These aren't annoying, smart mouthed brats but well drawn and acted characters with depth and pathos. Dante seems to have a great knack of picking such talent for his films and 'Matinee' is no exception. Even the crowd scenes of cinema going nuts with popcorn flying feel like genuine snapshots of a bygone era. 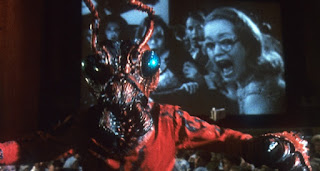 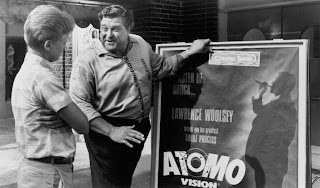 However the real love letter is to film itself, a wonderful trailer for 'The Shook Up Shopping Cart' featuring a 'Love Bug' type trolley that foils criminals and brings lovers together is taster for it's centrepiece: 'Mant!' - a perfect amalgamation of all those late 50's post war, nuclear paranoia, commie bashing invasion fear B movies like 'Invasion Of The Body Snatchers', 'Tarantula', 'The Giant Mantis' and 'Them!'.

Although dismissed as cheap thrills by the major studios, these films have often gone on to be far more influential and remembered that Oscar winners of the era. Dante picks some of the stars of those movies to appear in his spoof 'film within a film' as well as familiar stock footage only adds to the realism. It's tagline 'Mant! Half Man, Half Ant, All Terror' is funny but accurate a bit like the film itself which is played dead straight and all the more amusing as a result.

The themes of young love, nuclear panic, the last stand of a dying era - before JFK, before The Beatles, before the full horror of Vietnam are all woven into a fine comedy film that deserves to be re-evaluated and rediscovered. It's far smarter, sweeter and funnier than it was given credit in the nineties and has just been given a fresh lick of paint by Arrow Video. Their DVD & Blu Ray set features a fresh transfer and great supplementary material both new and vintage. The biggest treat is a 20 minute cut of 'Mant!' including Woolsey's introduction which really makes you appreciate the love and care that Dante poured into 'Matinee'.

Get yourself some popcorn and treat yourself 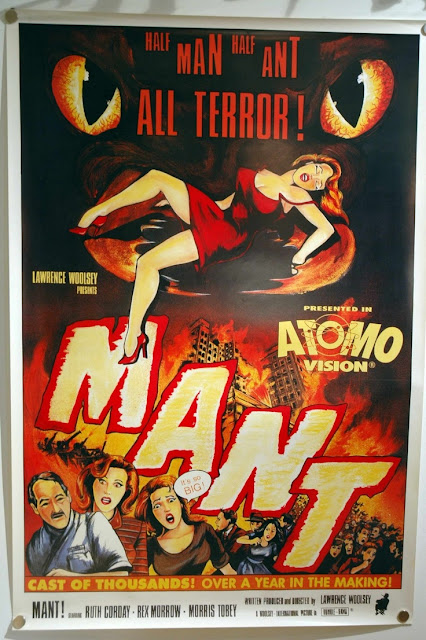