HERE BE SPOILERS YA BASTARD 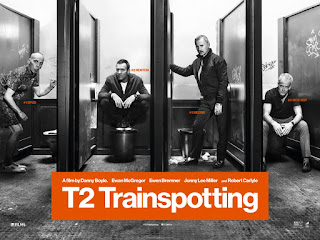 "Does the sequel have a lust for life?" you'll read and you'll want to be out there, pounding down the pavement with store detectives breathing down your neck, arms flailing - direct into the newspaper offices where they write about leisure for your pleasure. Throwing a glass Begbie style into the face of the hack who wrote that "Yous the kind of whiny faced CUNT who says "Costello's Aim Is Still True" a the end of live reviews." you'll be screaming. "it was the sub editor" they'll whimper but it's too late. The damage is done - your twentysomething memories have been shat on by a wee fucker.

OK Trainspotting may be better seen as a product of its times and where the audience that put the posters up on the wall were - at uni also purchasing Pulp Fiction, Reservoir Dogs, Prodigy Fat Of The Land and Taxi Driver or Italian Job from the stall in the atrium every Wednesday. It's soundtrack was a nigh perfect mix of old and new with Pulp, Blondie, Brian Eno, Lou Reed, Leftfield and of course, Iggy Pop's with Bowie acolytes the Sales Brothers and Carlos Alomar kicking it skyward from the opening moments.

Maybe this could only disappoint but it seems after 20 years of rumour and rejected scripts the film is summed up in a line from Veronika (a poorly drawn tart with the heart, Eastern European of course, it is Brexit Britain after all) to 40 something Renton and Sick Boy as they eulogise about George Best - "You just live in the past, you are clearly so in love with each other its awkward spending time with you, you should just get naked and fuck each other". You can't deny a warm feeling seeing the old gang back together but I'm not sure there is much else here besides.

The plot is fag paper thin - Sick Boy is surviving by getting his girlfriend to bugger Absolutely's Gordon Kennedy, film it & then blackmail the public school headmaster with the film getting several airings in case the brain bleach is working too well. He then decides to open a brothel in his ailing pub with the recently returned Renton and dopey loser Spud. There are a few nice set pieces - Renton and Sick Boy being forced to sing anti Catholic songs at a club they are fleecing the wallets and handbags of is great stuff and Ewan Bremner still excels at slack jawed clowning.

But that's about it. Of course the spectre of Robert Carlyle's fearsome Begbie is hanging over the film as he escapes prison, seeks revenge on Renton who scarpered with the drug deal cash at the end fo the first film and trying to train his teenage son in the ways of the underworld. The best scenes in the film may well be those between Carlyle and Scot Greenan as Frank Jr as the former struggles with the idea his son wants to go to college to study hotel management - a phrase he spits like phlegm. Unfortunately their plotline also contains an arse clenchingly awful cameo by Irvine Welsh who must be so glad of the cheque. The conceit throughout the film that Spud is in fact, once off the smack, writing the novel Trainspotting is corny as hell.

The film recycles and refocuses scenes or shots from the first film and perhaps knowingly resorts to "Oh you want a bit of nostalgia, d'ya, well ya remember when?" as dialogue between characters but that's simply not a good enough excuse. You know that tension in Radiohead's 'Creep'? That feeling you have before Johnny Greenwood plays those exasperated broken guitar slashes and its all explodes beautifully into a million perfect sunsets? Well the film often builds up the suspense, characters slowly drawn together and then leaves you hanging. The climactic showdown with Begbie goes all Jack Nicholson in The Shining and almost a direct repeat of the endings to T1 and Shallow Grave. 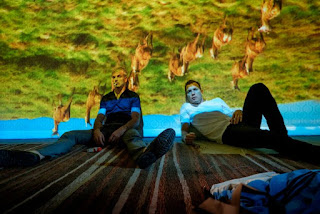 All the cast put in great performances even if any real development in their characters is slight. he female characters really aren't given much to do with Kelly MacDonald given a cough and a spit alongside the aforementioned Anjela Nedyalkova  as Veronika who just stumbles off into the distance. She's the Renton of the piece but the act is given no build-up and scant motive other than the oft repeated - for the hard of understanding - "First comes opportunity, then a betrayal".
The original is not a perfect masterpiece by any means but it's is a great time bubble and really should have been left well alone. It's cheap nostalgia in other people's misery and if you don't expect any more than that then its fine. The final shot of Renton back in his bedroom dancing to a slight remix of 'Lust For Life' says something about the trap that these characters find themselves unable to escape before it pulls away into the distance a la Time Bandits. It's a rare visual flash and imaginative touch that put Trainspotting on the map in the 1990 but like a university reunion party, you realise your memories are preciously rose tinted and you've gone and fucked it all up
Posted by Dog Faced Boy at 17:07