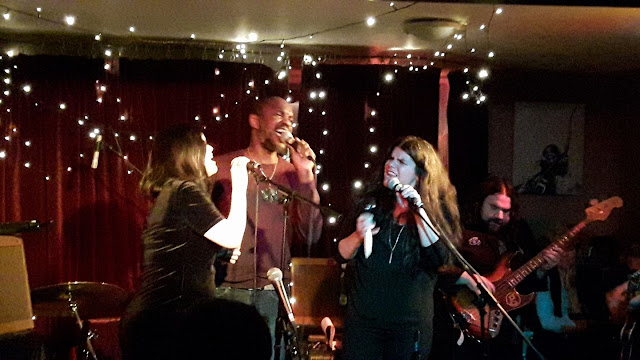 Well I was kindly given guest list to this intimate shindig in glittering London with a glittery backdrop for an every changing line-up. Not to review it as some kind of incentive but because The Magic Numbers are v nice people. After a long day at work I wasn’t 100% I would be able to make it. That would have been a BIG mistake.

Romeo Stodart and Ren Harvieu set the mood perfectly with a delicate ‘Have Yourself A Merry Little Christmas’ before sister Michelle and Rae Husbandes previewed tunes from their recent collaborative writing adventures. The night then fell into a cover-tastic delight with tip of the hat to Len by Ren with ‘Chelsea Hotel’ , a suitably seasonable ‘River’ and the Christmas treat of ‘Cowgirl In The Sand featuring Bernard Butler pulling off a great Youngian solo.

Mr Butler’s sometime long-time musical collaborator David McAlmont was in the house (The Magic Numbers served as support and part of band on the 2016 M&B tour) and we got a belter of a set. ‘You Do’, the timeless space love song ‘Falling’, a shake ya booty ‘Bring It Back’ from their criminally ignored 2nd album and a superb “In Memoriam 2016” medley of ‘When Doves Cry’ & ‘Let’s Dance’.
There was even time for a song from that still unfinished 3rd album – c’mon chaps!! – a new one I’m calling ‘What A Year (Done & Gone) which sums up how most people feel about the past 12 months.

The Magic Numbers took us through the final victory lap which included a ferocious ‘Shot In The Dark’ with Romeo and Bernard indulging in some guitar duelling which was jamtastic stuff. David returned to sing lead on ‘Love’s a Game’ and we got some old faves like ‘Love Me Like You’. The Santa sack was passed round as the contents got aired – ‘I Don’t Care If It’s Christmas’ before he smooth sound of ‘Zoom’ from David & Bernard and, yes, ‘Yes’. A cast rendition of ‘Silent Night’ sealed a rather incredible, magic evening as we stumbled out into the cold December night.

This was like having the greatest band in the world playing in your front room, with a bar and a free Xmas 7″ vinyls wrapped up. I am one lucky S.O.B. sometimes.
Posted by Dog Faced Boy at 17:53 No comments: 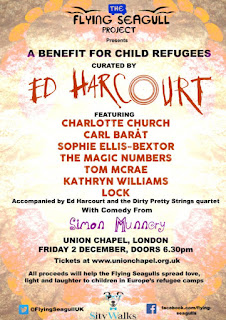 The Flying Seagull Project bring laughter and smiles to the lives of children across the world through clowning, games, songs and silliness including the shattered lives of Syrian refugees across Europe.

Tonight’s benefit curated by Ed Harcourt had such a great atmosphere from the off. A short stand up set from Simon Munnery aka League Against Tedium was a Catherine wheel of gags, sparking, flying in all directions, too fast to catch them all and his Churchillian speech about headlice resulted in a similarly surreal heckle of a man in the audience handing him a nit comb.

The first half was a feast of talent as singing sisters Lock sweetly suggested snogging in the cinema, Kathryn Williams & Anthony Kerr bought the room to hushed standstill with a bewitching ‘I’m A Fool To Want You’ from their album of jazz standards. Tom McRae and Romeo Stodart of The Magic Numbers were similarly soft but devastating with Tom delivering an ace version of ‘The Ghost Of Tom Joad’ – an appropriate protest ditty for the night.

Jeremy Hardy was in the house but sadly did not give us his vocal stylings despite the presence of ISIHAC piano botherer Colin Sell as interval act leading us in a rendition of Where Did You Get That Hat to the tune of The Dambusters March.
The second half was augmented by Ed on johanna and all female string section ‘Dirty Pretty Strings’ which produced some of the standout moments of the evening. Romeo killed again with a heartfelt ‘The Partisan’ delivered in a Cohenian low rumble. Sophie Ellis Bextor was nervous but shone effortlessly with pop glory including a reworking of that old Groovejet hit. Carl Barat gave sleazy ‘(Just Checked In) Condition, this stalker was thrilled to hear Kathryn Williams perform ‘Heart Shaped Stone’ backed by those gorgeous string arrangements on the recorded version.

And as for Charlotte Church – wow. She took ‘Lover You Should Have Come Over’ from its untouchable heights and went further. Recast with gospel backing vocals and southern soul she inhabited the lyric and empathised the shit out of Jeff Buckley’s mood.
The evening ended with the cast and congregation standing to give thanks and Hallelujah with Lenny’s death very much in the air for those on stage.

The message of the gig was not about what happened this night but what we choose to do next. The circus of politics this year has distracted us from the plight of tens of 1000’s  of people and particularly kids living in darkness, terror and unimaginable pain. People matter and we shouldn’t let politicians and the media take their eyes off what’re help is desperately needed

As Kathryn said ‘Those in power wants us to believe that people are all selfish and horrible but people are really great – so fuck em’ . A life affirming night that bought a smile to my chops.