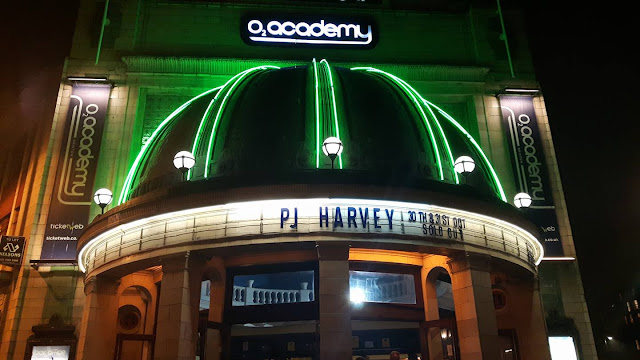 If you were in any way lukewarm on Polly Jean’s last two politically charged balls of fury then you would have been a) a little disappointed that this evening drew heavily on ‘The Hope Six Demolition Project’ and ‘Let England Shake for its main section and b) a fucking idiot who needs ear drops, syringing and a sharp bang on the head.

Entering after her band to military drums as they face the audience like an army staring down invading hoards, PJ is lustily blowing on a sax, melting into the band line-up. Having positioned myself up near the front it really emphasised how deliberate she is when performing these songs. Not only by giving the impression she is feeling the emotions expressed but the way she moves on stage. Often it reminds you of Kate Bush’s early promo videos with a similar wide eyed and theatrical style but with careful facial and hand movements at moments of stillness.

The audience are eating out of the palm of her hand, quietest large room of people during songs (seemingly of all nationalities if the several people round me was anything to go by) but roaring their approval in between. Wazzock count – very low.

The band are deeply impressive – including Mick Harvey on keys and the mighty Terry Edwards on sax who really lets fly at the end of ‘Dollar, Dollar’ to tumultuous applause. They have a real feral and blasting energy. The stop start of ‘Ministry Of Defence’ crackles with electricity and long time collaborator John Parrish grinds out ‘To Bring You My Love’ – one of the few 20th Century tunes we hear tonight. When they slam into ’50ft Queenie’ its so jagged and violent it could take your head clean off and Peej casts off the delicate movements to throw herself into the song with full on rock poses. 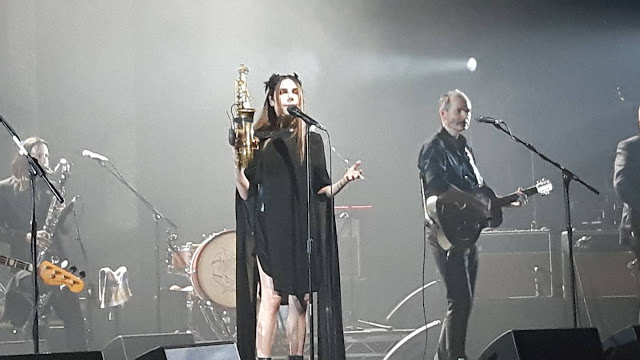 She does so again during the encore with a timely reminder of a wonderful lyricist as ‘Highway 61 Revisited’ gets a right pasting. Throughout the set, aside from band intros we get no pronouncements on politics or the like – let the music do the talking etc – but at the end we do get a sincere thanks and a broad smile. The subject matter and delivery might not be some peoples idea of fun but by god nobody is allowed to drift off when she’s on the stage.

PJ Harvey seems to do whatever the hell she likes, writes highly political social songs that the critics and her audience love and when she tours she can assemble a group of musicians to rival any other band out there.
Posted by Dog Faced Boy at 18:16 No comments: