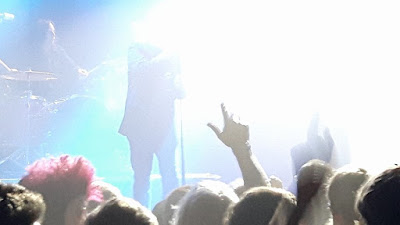 I don’t like this venue – let’s get that straight – it’s at the arse end of a shopping mall and they tried to call it The Marquee for a year. When it’s rammed, it’s uncomfortable and for short arse buggers it’s a nightmare. BUT I always forget that it has an absolutely stonking sound system and tonight was playing pre show tunes from bands influence by and an influence on JAMC. The Velvets, BRMC, Spiritualized, Joy Division etc but the Reid Brothers chose to take the stage to Lieutenant Pigeon’s ‘Mouldy Old Dough’.

I’ve seen the band a couple of times since they reunited including their first UK show at Jarvis Cocker’s Meltdown in 2007 and a tribute night for Nick Sanderson. I’d somehow missed their Psychocandy tour but they played plenty of it during the evening anyway – put simply, they were superb. Opening with ‘April Skies’ and then a snarly ‘Head On’ they were majestic, swathed in acres of dry ice of course. Jim apologises for playing “a sort of Greatest Hits” set but no-one was complaining. 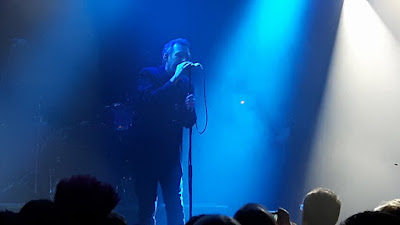 Those initial shows I saw , the band were a bit sluggish, the edges sanded off by age and sobriety. Don’t get me wrong, Jim was on nowt stronger than Evian and William needs bi-focals whilst studying his strings but they feel more energised tonight. All Things Must Pass, Candy & Happy When It Rains was a triple treat to rival any other band playing on a stage anywhere else in the world at that moment. Ending the main set was a monstrous ‘Reverence’, Jim sneering the Too Hot For TOTP lyrics “I wanna die just like Jesus Christ I wanna die on a bed of spikes I wanna die just like JFK I wanna die in the USA” as the band wail & drone to feedback city central.
Leaving us with ‘Just Like Honey’ and ‘Never Understand’, a guitar centre stage screaming feedback and promise of the first new album in 18 years. On this form it could well be one of those rare late bloomers.

26 years on from their first album they shouldn’t really be this good, in this venue but they were, no violence or infighting bullshit to get in the way of a great Scottish / British/ Wevs band howling into the void. Righteous.