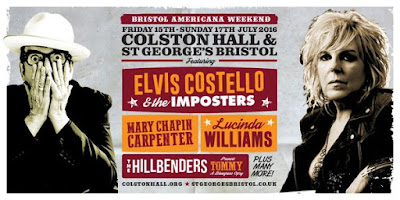 – Didn’t you only just see Elvis Costello?
Yeah about 2 months ago
– So why you going again – wasn’t last time a bit crap?
Yeah, bad sound and think I’d seen that Detour setup one time too often
– So why you go again, idiot? And why you telling me now – its 1am and you’ve just eaten two packs of prawn cocktail crisps. YOU’RE the one who likes those. Why should we take your taste seriously in anything?


Well I don’t think that I’ve seen Elvis with just the core Imposter band and no “gimmicks” in quite a while and tonight was far more of a stripped back rock n roll show without the wheel, leather clad female support act, big TV, go-go cages, tales from the road etc. For some reason this was billed as part of an Americana Weekend but apart from playing ‘Brilliant Mistake’ with it’s opening line “He thought he was the King Of America” it had nowt to do with the concept.

Coming on to a Suicide track as a nod to the late Alan Vega, the band stated their intent with what would usually be a set closer – a thrashy Pump It Up as EC’s guitar slowly came up in the mix (you had one job….) followed by Big Tears which was originally the B-side of that single. I like to think that was just for us nasty little train spotters as was ‘Mood For Moderns’ returning to the live stage after 26 years reminding us of it pop fabulousness. Hardly any duplication for the set he had played just two months before – No ‘Alison’, ‘Can’t Stand Up’ and certainly no Jimmie’s standing in the rain and there was no hat either. His lengthiest speeches were reserved for new songs ‘American Mirror’ & ‘Face In The Crowd’ from a new project and very fine they are too.

Bassist Davey Faragher kept it tight but loose, Pete Thomas may have regretted his alleged dissing of EC’s slower tempo in Bruce Thomas’s latest memoir as he was given a right workout particularly on ‘No Action’ but as ever, Professor Steve Nieve, dressed like a Droog going for a job interview is the man with all the gifts via his keyboard jungle. Whether it be on organ, grand piano, Vox Continental or Theremin he adds the colour and the drama to the songs whether it be true menace to ‘Pills And Soap’, bubbly synth for ‘Green Shirt’ or deep fathoms of pathos to ‘Shipbuilding’.
Yes, he played ‘the song the band hates, that I hate but you seem to like’ with Pete Thomas clutching at his head in horror as Elvis sings about “she is the face that I can’t forget’ but we also got a nice little country interlude of ‘Tonight The Bottle Let Me Down’ & ‘Sweet Dreams’

As I said no real chat, a few asides about the state of the world – Trump, Brexit & the horror but his song choices may well have done the job for him. He has been rolling out ‘Night Rally’ Armed Forces warning against the rise of fascism in the late 70’s but tonight we got ‘Sundays Best’ and not just because it was. It’s opening salvo “Times are tough for English babies Send the army and the navy Beat up strangers who talk funny Take their greasy foreign money” was a warning from history.

I’ve been to see Elvis coming on for 30 odd times now and there were perhaps two bad nights in all those as he continues to shuffle his talent and interests in such a way that you feel that you’re seeing something fresh. Although I could do with never hearing DDTM again.
The end of the show bought us Oliver’s Army, Chelsea and PL&U but this was anything but a crowd pleasing set. Dropping in bombs like ‘Alibi’ and a rockin’ cover of ‘Polythene Pam’ made for a much edgier night than expected – long live the king!