There is a solid reason why Ash, when many of their ‘Britpop’ contemporaries have thrown in the towel and got proper jobs, have managed to survive without becoming a nostalgia act – Tim Wheeler’s uncanny knack to fashion a punky pop melody. ‘Kablammo’, rather than a slowed down version of their former selves is just as ‘kick you in the face’-tastic as they have ever been.

Solid gold slam-dunk, arms in the air, jumping, swaying, laughing, moshing tunes like A Life Less Ordinary, Orpheus and Jack Names The Planets do not mean that newies such as the infectious ‘Go Fight Win!’ , ‘Let’s Ride’ or ‘Moondust’ sound anything less than equals. Even ‘Wild Surf’ from the unlovable ‘Nu Clear Sounds’ – the classic example of a record recorded after tour and fame burnout – is a delight – the sound of the summer. These songs were always sky-scraping, joyous celebrations of life and the band remain forever young in their late 30’s.

‘Kung Fu’ turns the floor into a bubbling mass of pogoing just as ‘Oh Yeah’s timeless tale of summer lovin’ gets arms aloft, voices raised in unison as 20 years just slip away with a band showing as much energy and commitment now as then. Bassist Mark still stumbles around the stage before launching himself out on it’s edge, Tim’s shit eating grin plastered across his chops like he has the best gig in the world and drummer Rick solid as an indie rock with great deadpan chat between songs. Why wouldn’t you want to share in the fun?

After 23 years this lot are not about second, third or forth winds anymore – they are just confidently hitting their stride. “We’ve been coming to London from 21 years now and you’ve never let us down” said Tim, before a suitably incendiary tear-up of ‘Burn Baby Burn’ kicks us into the street. The feeling is mutual, sir.

Kathryn Williams - Hypoxia : 'Come On, Step Into The Eye Of The Storm' 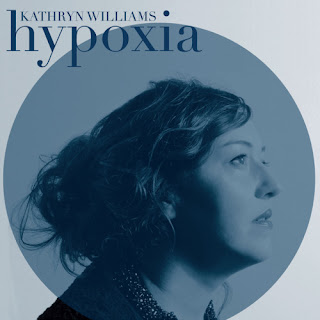 'Oh the last time I felt lonely the room was full'

When I was at university in the 1990's, young women on my English literature course were all about The Plath. Particularly her novel,'The Bell Jar', was like catnip and many shallow young male students professed admiration for it for less than academic reasons.

If only there had been a soundtrack to evenings in halls discussing the book's subtexts maybe some of us would have got more lucky than we did. However that would make us as bad as hypocritical Buddy, the boyfriend of the book's protagonist or the loathsome lothario, Marco for ignoring the struggle for sanity and social acceptance that Esther strives for.

When Kathryn Williams was commissioned to provide songs based on 'The Bell Jar' as part of 50th anniversary celebrations at the Durham Book Festival in 2013 she returned to the novel and was struck by how modern and relevant it had remained. The set of songs that make up her new album 'Hypoxia' show a deep understanding of the pain, experiences and anger of Esther and those around her. Those who have undergone any kind of therapy, periods of depression or mental illness will find lines here that cut right to the heart of the matter

It's hard to encapsulate the album's sound in a word, so I won't try but it is woozy, claustrophobic, dreamlike and sparky - a real star turn by producer Ed Harcourt who also adds harmony vocals. The opening 'Electric' is slowly enveloped by a fuzzy warm embrace as Kathryn's vocal slips into accepting ennui. 'Mirrors' crackles with synapse pulsing energy, Kathryn utilising her onstage vocal looping to great effect echoing Esther's confusion and fear as her grip on her self starts to change. On repeat listens you hear new sounds and vocal inflections that pull you further into the eye of the storm.

The expressiveness of Kathryn's voice has always been what drew me in to her work and on this record she really does emote the hell out of the material, the 'ticking, ticking bomb' of 'Battleships' giving the feeling of menace, fear and disgust in the book's scene where Esther is cajoled into meeting her boyfriend, Buddy, by both their parents in an attempt to steer her onto the path to marriage and the accepted norm for a young women of the age. The imagining of this scene as a game of battleships with Esther trying to avoid the traps set for her and destroy any attempts to break down her resolve works really well.

'Cuckoo' beautifully condenses the feelings of many parents and relatives of people with mental illness - that others will look upon them as somehow responsible for their child's illness and thereby they struggle to understand why or how this could come to pass. In the novel Esther's mother, when Esther agrees to see a psychiatrist sighs in great relief - "I know my baby wasn't like those awful dead people at that hospital. I knew you'd decide to be alright again". Kathryn shows her inability to sympathise with her daughter, 'My little girl's gone mad / And who will they blame but me?' with the echoed refrain 'I couldn't pick you out of a crowd' demonstrating how the illness has taken Esther and the dream of a life she had for her daughter away.

As I said there are so many lines that just cut to the core of how mental illness effects us all. 'When Nothing Meant Less' is the track I keep coming back to again and again as it speaks to that dark part of me that I kept hidden for so long. 'And when you thought that I was strong / I always knew that you were wrong' she sings to her childhood friend reflecting on the journey both their lives have taken. The regret and despair of  'And I don't even know how your story ends / Cos you turned a corner and I stayed on the bend' is just heart-breaking.

This isn't a solemn or depressing listen by any means - melancholy, yes, but there's nowt wrong with that - a key chapter in the book receives the angry and pointed 'Tango With Marco' as he is pinned to the wall with sharp lyrical blades 'On the back of your eyes there's a list / Of the different ways to hit - and kiss' who sees women as 'a coat draped on your arm / I'm a jar on your shelf/ Or a pig in the farm'. Whereas the waltzing 'The Mind Is It's Own Place' brings comfort in our ability to survive life's traumas and emerge hopefully stronger and wiser on the other side.

To get the most out of the album it may have helped if you have read the novel on which it is based but as I had already done so I can't tell. It may have deeper significance if you have suffered periods of mental illness but again I can't help you there. What I do know is that 'Hypoxia' speaks as strongly and assuredly as 'The Bell Jar' does about life's expectations, troubles and the wondrous way in which the spirit endures despite it all.

'Hypoxia' is released on 15th June 2015 via One Little Indian Records on CD, Vinyl and I-tuneshttp://indian.co.uk/shop/hypoxia-album.html

Kathryn is touring throughout the UK over the next few months so get out and catch her live
http://kathrynwilliams.co.uk/live

(I'M TRYING TO KEEP MY BLOG REGULARLY UPDATED BUT HAVE ABOUT COUPLE OF A DOZEN THINGS HALF WRITTEN THE I CAN'T FINISH. THIS FLEW OUT OF ME LIKE A WATERFALL WHICH IS WHY IT IS HERE)

You can go home now, you’ve seen all the hits” yelled The Beloved Entertainer as he strode to centre stage, the giant TV set behind him having played promos from his past while we awaited his arrival. (why don’t more bands put thought into entertaining the audience during these longueurs? – The White Stripes used to show old 50s cartoons). It’s a tricky balancing act he takes on these days – rewarding the trainspotters (Hello!) with rarely played nuggets while satisfying those there to hear ‘Oliver’s Army’ and She. Tonight he pulled it off superbly in a two hour set that spanned the years as he painted himself in the same vaudeville tradition as his father and grandfather.

He opens with two songs from the same vintage but years apart, ‘Red Shoes’ and ‘Blue Minute’ – both demoed for ‘My Aim Is True’ but the latter not seeing the light of day until the umpteenth reissue of his debut. There was a sparkiness and energy in his delivery of even familiar material. “Look out music lovers, I’m gonna play the piano’ he once yelled on a live B-side’ which was felt on last years jaunt where a shonky electric keyboard made songs like ‘Shipbuilding’ sound like musak to my ears. Fellow gig attendee @SteveT remarked that his other half must have been giving him a few pointers as his playing on that and ‘Shot With His Own Gun’ was fine although missing Steve Nieve’s effortless light and shade.

He paid tribute to local boys, The Move, with a verse and chorus – “it’s all I know” – of the mighty ‘Blackberry Way’ who I assume have a star on the Brum Walk Of Fame that runs past the venue. I spotted Jeff Lynne, Murray Walker, Noddy Holder & Tony Iommi among others. The dreaded ‘She’ reared it’s head during a section that Elvis performed on a rocking chair under a standard lamp. Shorn of its sticky strings and bombast, low key with softly picked strings it became Parisian café introspection with no vibrato but still as yearning.

His brother , Ronan Macmanus, whose Brand New Zeros had opened the night, joined for a strum through crowd-pleasers ‘Good Year For The Roses’ and ‘Oliver’s Army’ before Elvis appeared inside the big TV to ‘Pump It Up’. A slowed down piano take of ‘I Can’t Stand Up For Falling Down’ bought it back to the original Sam & Dave version which was my personal highlight along with the guitar loop and feedback squall of ‘I Want You’. The fact there was room for ‘Peace Love & Understanding’ & the underrated ‘Mr Feathers’ from the criminally underrated ‘Momofuku’ in tonight’s set shows there was something for everyone.

This fabulous venue seems to bring out something special in Mr Costello – whether it’s the audience, the ambiance or response but it makes the trip up the M40 worthwhile.
Posted by Dog Faced Boy at 20:20 No comments: