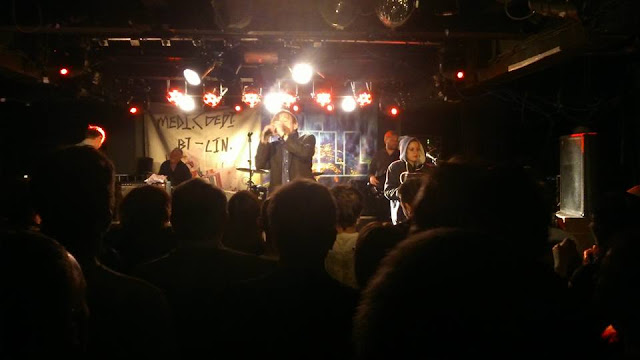 I was listening to the band’s new album ‘SubLingual Tablet’ over the weekend and thought “This is rather spiffing, I wonder if they are playing near me soon”, I google and find tat, yes, in a couple of days time at the comfy club in Reading where I saw them last. On that occasion a fight broke out and police were called so donning Spartan battledress I went along.

The first thing to note is that Mark E Smith managed to stay onstage for the whole time. His last appearance here involved disappearance for about 5 songs while the band ploughed on – apart from the start of encore ‘Junger Cloth’ where he was a little tardy. He seemed to be in a good mood, regarding the crowd with a thousand yard stare, only occasionally turning his back to read lyrics off tatty bits of paper.

At one point Mark put both his mics in front of guitarist Pete’s face for him to sing which seemed to cause him some difficulty (doing two things at once) which amused MES no end so he kept it up, his face breaking into an evil pixie grin. Drummer Darren also took over lead vocals during ‘2014’ coda whilst still thrashing away then walking out to stage centre.

The five piece band really played an absolute blinder tonight – the bass rattling your teeth, never less than tight, the new material sounding even better than expected – ‘Venice With The Girls’ and ‘Quit I-phone’ in particular, ferocious and funky. Creating a solid bedrock for MES vague approximation of the lyrics – droning, squalling, throbbing and precise. Ending with a spiffing ‘Sparta FC’ which had the place rocking and chanting along, grinning like MES torturing his grupe.

Those who believe the Hepworthian bullshit about this band really miss out on one of the greatest live experiences you can have. If you see them playing a small club near you, even if you’ve seen them before and think you’ve had enough – go, the Fall on great form is mesmerising
Posted by Dog Faced Boy at 20:24