I was unable to go to a gig this Friday and when you hear it was Kathryn Williams regular readers will understand I was a little disappointed. However I was a little dismayed to see these following tweets from Kathryn and gig attendees, of the double headlining gig with Damian Dempsey at Shepherds Bush Empire.

(hope tweeters don't mind me illustrating my point with their words - if so, LMK and I'll delete)


I wasn't there so this is pure conjecture but of course, double headliners are a tough sell as you have two sets of fans but you would have thought that the fact Kathryn wasn't just a support act might have held some weight. We've all seen support acts getting treated terribly by audiences and its equally as disgraceful.

Funnily enough I think I was probably at that last tough gig Kathryn had which may have been at the legendary 100 Club in London. It was an UNCUT magazine night so I'm guessing everyone in there was either staff, staff of the whiskey sponsors or competition winners (like me). The majority were just talking away whilst all the acts were on. I say all, I had to leave after Kathryn's set and miss headliner, Ed Harcourt as I just felt I was about to do physical harm to almost everyone around me who hadn't been delighted to win tickets. As a regular gig go-er I find it puzzling, obnoxious, selfish, nonsensical and downright fucking rude.

We all know the cost of living is going up and concerts are often luxuries, those little treats to ourselves more than anything else. Which makes it doubly puzzling when people pay to enter a venue, often paying higher drink prices than a regular boozer at the corner and then chat whilst the artist they came to see is performing. That defies my understanding, it really does.

The argument may be "I've paid my money, I'll do what I like" which is fair enough up to a point, after all we're not expecting venues to be like churches (unless it's the Union Chapel or St James' in Piccadilly but you get my point) but if you talk all the way through the songs, clap just as a Pavlovian response as everyone else is doing so and then continue to talk you are not engaging with the music in any way. Perhaps its the seemingly insatiable need to view everything through the lens of a camera on you phone that makes people think they are watching from their armchair so that talking doesn't matter. Or maybe, people are just no good, as Nick Cave once suggested.

Sometimes it takes as little as a tap on the shoulder and a "shhhh" mime to solve the problem and sometime that just makes things worse. I recall the Elvis Costello gig in Hyde Park last year, a concert that ended up being free when headliner Elton John pulled out. All was fine until about halfway into EC's set when a loudmouth American girl (no offence to Americans but she just was) elbowed her way to the front where we were and proceeded to talk loudly to perfect strangers, take a selfie of herself with Elvis in the background, make calls and when she asked someone to take her picture with back to stage the response as "If I do are you going to shut up for the rest of the gig". This elicited a threat to get security to throw them out for spoiling her evening.


Some artists have ways of dealing with this - on Spiritualized acoustic tour Jason Pierce would just sit there until people were silenced by either peer pressure or finally getting the message that their behaviour would not be tolerated. This wouldn't mean a shorter set just it would take longer and in the words of many a teacher "it's only your own time you're wasting". This was all despite polite signs all around the venue and an announcement at the start to refrain from talking.
A great little venue in Kilburn called The Luminaire used to have these signs that crystallises my thoughts exactly. 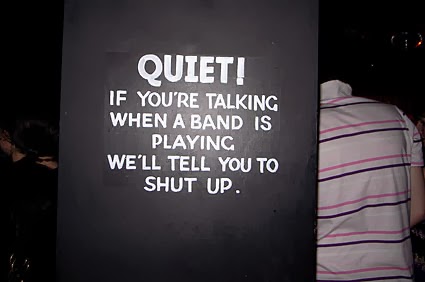 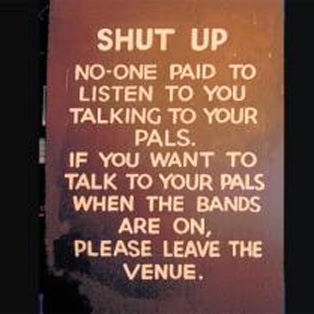 I hope someone took them and still treasures them when the place closed. Maybe because of this "draconian" approach you could say. Shame as it was a great place to experience live music and I'm sure the artists thought so too. They also had staff that didn't throw glass bottles into bins from 10 feet away, talked loudly to each other when not serving and would police any talkers who thought standing back by the bar made them soundproof in such a small room.

Unfortunately despite all this grumbling I'm not sure there's an easy answer. I find that it means I have to get to gigs early as possible to get as far forward and assume everyone else up the front is there to hear someone else's voice rather than their own. Of course this means risking hearing damage at some shows but hey, whats a little tinnitus between friends? I SAID WHAT'S....etc.

I guess my message to any musician that may stumble over this - we feel your pain, we despise and find these people talking as frustrating as you do. We're sorry to even be in the same audience as them but they're too stupid or selfish to know any better.

"And there's still life in your body
But most of it's leaving
Can't you give us all a break
Can't you stop breathing?