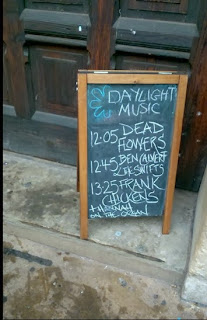 People of the capital.

I just want to make you aware of a little gem that exists in your town. And its free*

There is homemade cake, biscuits to go with your tea and coffee and great music in relaxed surroundings. It occurs to me, even as a teetotaler, this this is the perfect antidote to a Friday night booze up.

It definitely had a completive air the session that I attended last month. As I walked in, quite fitting for a chapel, the organ was playing but it took a few moments before I realized it was the theme from ITV cop drama 'The Bill' followed by a sensitive take on London's finest Chas n Dave's masterwork 'Ain't No Pleasing You' which set the tone perfectly.

Both Ben Calvert and Dead Flowers were the perfect accompaniment to a mid-day cuppa. It appears from his site that this was Ben's last show which is a shame but his description of the atmosphere was spot on. I'm unsure whether I'm a middle-ager or a hipster
but thats my problem.

The main reason for my attendance was Frank Chickens who I had briefly seen at Stewart Lee's 'At Last the 1981 Show' at the Festival Hall - a celebration of the alternative comedy boom. Lee had also sparked a campaign against the Fosters Lager promoted 'Best Ever Comedy Act' at the Edinburgh Festival by encouraging people to vote for Frank Chickens. This was to point out the ridiculousness of comparing comedic acts but also because he loves this absurd (in the best sense) act.

This collection of 'socially and sexually confused people' at turns creepy, kooky and sweet' can't fail to make you grin. Their seemingly innocent stage patter contains little barbed comic comments that confound any preconceptions. They truly are a unique force of nature. 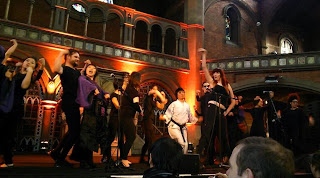 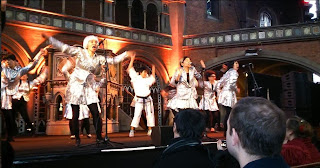 The whole event was an absolute pleasure although on the day I went, only half full. So, people of London, support this great enterprise with your donations, cake purchases and bums on pews. It deserves to be THE place to be on a Saturday afternoon. Throw off the duvet and get down to the Union Chapel.

* well, they would appreciate £3-50 donation which for all this music is a small price to pay and all proceeds go to the Union Chapel's own homeless project.