Meet The New Bass. Same As The Old Bass? 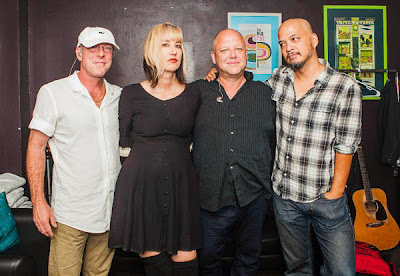 So Pixies Mk II. Cool-as-fuck Kim Deal has departed and the marvellous Muff's Kim Shattuck has the unenviable task of taking her place. Kim's unconventional playing and unique vocals are there for the destroying.

I was fortunate enough to win a pair of tickets to the show via the band's mailing list which meant we were able to walk past the other ticket holders waiting outside and get a prime spot for the show. I was a little apprehensive about seeing this new line up if I'm honest.

I needn't have worried. Within seconds of the opening UK Surf take of 'Wave Of Mutilation' it was business as usual. Kim S was able to underplay the bass lines like Kim D but also add her own style. As the show went on it failed to matter, she passes the audition in front of the band's "other home" crowd.

Of course I am unsurprised they dropped Deal's signature song 'Gigantic' but was good to hear some new\old songs alongside the new\new songs. A slimmer Black Francis, despite uttering not a word to the audience all night, seemed to be really focused and enthused to be on the stage. Slowly warming up the crowd they gave us a sublimely perfect 'Here Comes Your Man' (AKA The Best Song That REM Never Wrote) with the 'so long, so long' refrain echoing round the dome.

'Velouria' was majestic as ever but you could sense the crowd wanted a bit of energy which arrived with a bam thwok with Break My Body, Crackity Jones, River Euphrates and Something Against You' that sucked a 35 year old teacher I know into the whirlpool of flaming limps and a couple of old skool crowd-surfers. From that point the show really took off.

The new songs blended easily with the old material. Lead release 'Bagboy' sounded great along with tracks from EP-1 although played alongside a bizarre cover of The Fall's 'New Big Prinz' which I failed to recognise at the time (how very Fall) gave the audience a "Don't know these" rest before a ferocious run to the finishing line topped by a head rattling 'Planet Of Sound'. And obvious encore of 'Monkey' led to a ragged 'Vamos' with engaging in some guitar histrionics, feedback and vocals.

Some of the crowd may have left wondering why 'Debaser' or 'Nimrod's Son' failed to arrive but I was happy that the band seem to have gained an extra spark since recording new material and despite the Kim swap, maintain their power and edge as a live band.

Next day, fuzzy head, fizzy ears and flaky voice. We still adore ya