A new millennium dawns on The Year Of The Diamond Dogs 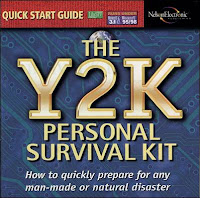 
No more big wheels
Fleas the size of rats sucked on rats the size of cats
And ten thousand peoploids split into small tribes
Coveting the highest of the sterile skyscrapers
Like packs of dogs assaulting the glass fronts of Love
Ripping and rewrapping mink and shiny silver fox, now legwarmers
Family badge of sapphire and cracked emerald

Well the first moments of the year 2000 wasn't quite like that. I was right next to the Houses Of Parliament. I can't remember how I got there - not through drink or drugs but a simple lack of appreciation of to why on earth I was on my own amongst this throng of people at midnight when I despise New Years Eve and its enforced sense of fun

I had driven into town, parked outside the exclusion zone in Earls Court and walked all the way down to the South Bank. Ken Livingstone and his pals had laid on free music and I remember a steel drum band making a marvelous racket under the arches of Waterloo Bridge, Glenn Tilbrook engaging the audience in a version of 'Perfect Day' a la the BBC advert and my first introduction to Alabama 3.

The Very Reverend Dr D. Wayne Love surveyed the 5pm family crowd and spoke - "Fuck the millennium, we gettin' on for three thousand years on this rock....' the rest of his intro drowned out by tutting parents and picking up of M&S blankets on the ground. They played a funky little set with a guy in full Santa costume dancing through the crowd swigging from a bottle of Jack D. They were followed by an Cuban band playing an endless version of 'Guantanamara' so I moved on.

I recall walking over Westminster Bridge, getting stuck in a bit of a logjam of people, wandering back over to the south side, then along the embankment past two bridges closed to anything but emergency vehicles. There was hardly anything on the roads and it was full of people taking over the place.

This was very much pre 9\11 times and I can't imagine that sort of careless and spontaneous invasion of the heart of British power happened ever again without a riot kicking off. Eventually I made it back to around the Houses Of Parliament - countdown, cheers, random snogging and then walk back to Earls Court.


Oi, I hear you cry, what's all this got to do with David Bowie's 1974 concept album. Like Zabriskie, I'll get to the point.

As I pulled out into the empty roads of London and onto the Westway to the world I had an important decision to make. Which album would I play first in this brave new age for humankind?

Well I've sort of spoilt the surprise but it was The Dame's 'Diamond Dogs'. It was around 3am, I didn't see anyone else on the road for a good 25 miles - it was as if the Y2K bug had hit and turned the world off. Sober and not speeding it was quite a feeling as this beautiful strange music carried me home.

As ne fule kno Diamond Dogs was partly influenced by Bowie's attempt to write a musical version of George Orwell's '1984' populated by 'A Clockwork Orange's droogs and The New York Dolls.
When Orwell's widow crushed the project he created this dystopian soundscape.

Although Ziggy was long dead, this albums marked the end of Bowie's gender bending rock period. And I believe that the Sweet Thing\Candidate section on Side 1 may well be one of the best things he has ever done in his remarkable career.

And isn't it me, putting pain in a stranger?

It oozes sleaze, danger, sexual excitement and thrills. The song creates in my mind an archetypal New York City alleyway, its puddles of oil and water, scaffolding and fire escapes, overflowing garbage cans and stray cats picking at dead rats.

The backward sounds and confusion that kicks things off reflects the brain of the young characters in this song.
Flirting with danger Bowie plays the hunter and hunted - those feeding off the young for their pleasure and the young wanting to see the bright lights whatever the cost.

When it's good, it's really good, and when it's bad I go to pieces
If you want it, Boys, get it here, then

Bowie's vocal is deep and slightly raw and at turns soaring, his masterful use of falsetto on the immaculate intricate backing vocals a career highlight  The sultry wailing sax clinging to the razor guitar sound as the drums play a slow military beat slowly gathering pace as the tales of excitement and desperation takes hold joined by a sassy tambourine shake.


Is it nice in your snow storm, freezing your brain?
Do you think that your face looks the same?
Then let it be, it's all I ever wanted
It's a street with a deal, it's got taste
It's got claws, it's got me, it's got you ...

I've seen 'Rock N Roll With Me' being described as a low point of the album and admittedly it seems kinda straight and normal compared to the material that surrounds it. However I think its one of Bowie's best ballads and finest vocals.

I heard the closing section of side 2 of 'Diamond Dogs' playing in a North London record shop recently and I was taken once again with how truly unusual and slightly unhinged it was., The funky soul rhythm and strings of '1984', the conversational 'We Are The Dead' with subtle vocal treatment adding to the unease of this tale of a predatory old man and the sex police knocking on the door.

'Big Brother' unsurprisingly has a foreboding, dark atmosphere, yearning for a saviour from the pits of vice and sin depicted over the course of the album and dissolving into the hypnotic 'Chant Of the Every Circling Skeletal Family' and ending on repeat.

The album often gets characterized as Bowie running on empty on the last fumes of his first shot of fame. For me its an artist at his most inventive and imaginative fueled by pharmaceuticals and milk. I would have been quite interested in Bowie's take on a '1984' musical. And at its dark heart is Sweet Thing\Candidate and 'We Are The Dead' - with enough illicit sex, death and depravity to keep your average emo band going for a whole career.

guess we could cruise down one more timeWith you by my side, it should be fineWe'll buy some drugs and watch a bandThen jump in the river holding hands