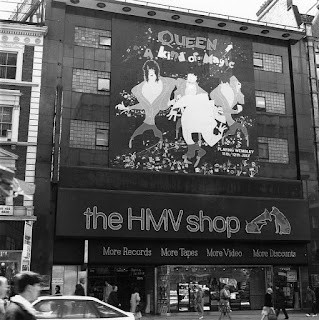 Somewhere in London, Queen have always been towering over us all (Oxford Street 1986)


Living out in the commuter belt as I did (and continue to do) we had a few record shops. The standard Our Price \ WH Smiths\ Woolies \ Boots and a couple of indie stores. One of them, I worked in for a couple of years before the owner ran off with another woman leaving debts and tax bills a-plenty. That little shop was important when I couldn't find XTC's 'Senses Working Overtime' in the big outlets as it wasn't a hit yet but good old Opus One (which was hardly bigger than an average 4x4 posh mum mobile) took my 79p for that little slice of heaven.

However when I was at school, any money that wasn't spent in Opus One or Revolution Records in Windsor was saved up for the trips up to London on the train with my mates to the golden mile of Oxford Street with the twin towers of HMV 'Europe's Biggest Music Store' and the Virgin Megastore down by Tottenham Court Road. In 1987 my parents finally allowed me to go to the smoke on my own and our first port of call was always there. 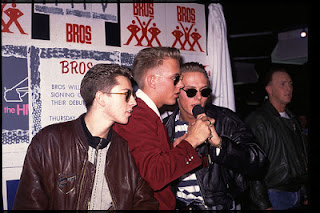 What with it being the late 80's and all that dance music in the charts being a fad (prove me wrong, people!) I was a little metaller - Bon Jovi, Iron Maiden, Metallica, Guns N Roses, Def Leppard Poison, Motley Crue etc. Men with too much makeup, hair and denim. Loud guitars, stoopid lyrics and girls, girls, girls. Yet, most importantly, for some reason your parents hated them. This would carry on for a good five years until grunge killed it stone dead. Talk about the Roses? Not unless they're dancin' with Mr Brownstone. The La's? Do you mean Cinderella, la? Def Jam? Do you mean ver Leps?

This period also meant that I learnt about older (and often better) bands that these bands cited as influences - Zep, Sabs, Purps, Mott, Dame, Stones etc. I can't say I play much of that stuff these days (much=any) but then it was a sewn on patch of honour.

Anyway, enough justification for lapses in musical taste as a 12-13 year old for tribal reasons. Whenever school broke up for any reason we used to raid our piggy banks and head to HMV - cos, like, it was the BIGGEST record shop you had ever, ever seen. Whole walls full of cassettes, rows of those new fangled CDs. and lots of singles.

Oooh, this one has an import sticker on it. Yes its £2 quid more and the same sleeve but the middle of the label is missing, you wally! I'll have to use that strange adaptor on my record player to play it. It's special.
No, shut up, you're jealous. No, I saw it first, get off. No, I don't want that Guns N Roses interview picture disc instead......

As only music nerds can we used to spend literally hours in HMV Oxford Street. The Virgin Megastore was an alternative but it didn't measure up. It's crappy wax works of Prince and Michael Jackson around the walls were weird and if it wasn't for the comic Department and the D&D games we wouldn't bother. At the end of the day we'd slump into our seats at Paddington with HMV carrier bags of CDs, singles, tapes, new posters and officially sanctioned T-shirts sure to annoy. 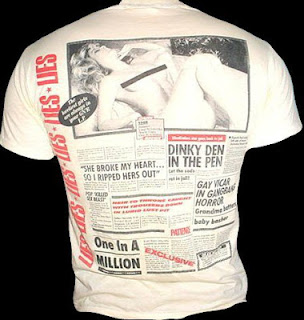 "Whats wrong Mum, its just a T-shirt?!" (soon to be accidentally ruined clothing from 1989)

Later I discovered the smaller and more desirable record shops of London but when you're a tweenie, its all about the big stuff. HMV was the shop where those weird blokes used to hang about outside with their shaved heads and strange literature, asking for money to help fund their charity. They knew that unknowing and slightly frightened kids from out of town would be good for a couple of quid.


Today's news that HMV are probably a thing of the past on the high street is sad but not unexpected. We can all list the reasons - changes in the music industry, technology, uncompetitive prices, decrease in knowledgeable staff,  less eclectic etc etc etc.

I can't remember the last time I bought something in an HMV shop as their sales stopped being attractive, their back catalogue more ridiculous expensive and the emphasis shifted from music to games and Ipods. Of course I occassionally use Fopp for retail therapy which will also disappear. The last time I actually bought something from HMV was online. I pre-ordered the 2nd Grinderman LP on vinyl and was entered into a prize draw. Maybe few other people did so, perhaps there was a section of tickets set aside for vinyl pre-orders  but I won the opportunity to see Nick Cave's combo up close at Highbury Garage.  It was deafening and fabulous.


Maybe we shouldn't weep too much as the HMV that died today isn't the one that we like to remember and it was their success that hit the indie record shops and drove them from the high street. The demise of HMV may be of some comfort to those still afloat.

Picture this - a new band may never be able to walk into a high street music shop and see their bands name written on a grey divider in the CD racks between those of their heroes. Music has become less of a physical entity and somehow seeing you bands name on Spotify just won't feel the same.