James Tiberius Kirk hears of the demise of Blockbusters 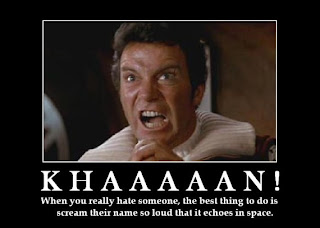 Another day and another firm goes under - Blockbuster Video to much gnashing of teeth and tales of woe. I don't recall this type of fuss when Tandy and Rumblelows bit the dust. Wither Radio Rentals? etc

I drove past a Blockbusters last week that I used to hire from on a weekly basis and though "Christ,l how are they still going?" Well now they aren't. In the days of Netflix, Lovefilm and Piratebay its hardly surprising. I don't think I ever hired a DVD from them.

I've done it from the council library and surprised they didn't have those diagrams of the disc like they used to for vinyl. The scratches on the record were marked on the diagrams so if you returned the album and there were new scratches, you was in trouble from The Man, Totally foolproof of course - its not like you could add scratches yourself with a biro. No, these were more honest times. I imagine most of BB staff's time recently was taken up with people bringing back DVDs covered in ash and coffee stains, saying they didn't play and asking for a refund

Anyway, the first time I ever rented a video was when my Dad took us down to the 'Video One' shop in town. We didn't have a video player but my Uncle Bob did and we were getting something to watch over at his.  I remember it clearly, small shop, Betamax on the left, VHS on the right (already slightly more choice and range - the writing literally on the wall)


Despite the 1st Star Trek film being one of the most rotten sci fi films ever made - dull, dull, dull. I chose Star Trek II: The Wrath Of Kahn. I remember being an annoying little shit and asking how we would have time to get over to my Uncles and back and watch the film before bedtime *. When we got home we found a brand new Ferguson Video-star player under the TV. The future had arrived! 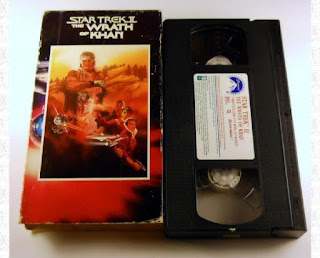 Dodgy copies of ET, the Star Wars trilogy and video nasties and Electric Blue, Mum;s tape, finding end of a murder mystery had been taped over by the a thrilling 0-0 draw of Arsenal vs Oldham - such things is Peter Kay's career made.So I look upon the closure of Blockbusters in the same way I view the closure of HMV. Its sad for the people involved but a changing world and their inability to change with it is key.