It's not the side effects of the cocaine 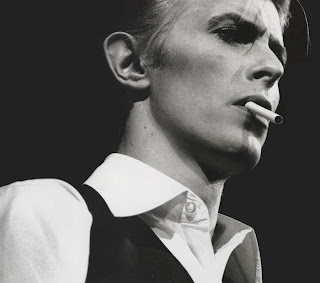 Yes Ziggy, yes Major Tom, yes Aladdin Sane but you know it - Bowie's coolest of the fuckest period was when he was The Thin White Duke.His most glorious statement was the album and the title song 'Station To Station'. The album itself is an embarrassment of riches

If there some way to distill pure Bowie, to remove all the impurities, characters and disguises and get closest to the man, 'Wild Is The Wind' is it. Here he uses none of his vocal tricks and accents and just sings from his heart., Its breathtaking stuff. If Bowie ever returns to the live stage he should do it this way - Mike Garson on keys, the Leonard Cohen suit and hat combo, maybe a couple of attractive backing singers. That's it. Lady Grinning Soul. Rock N Roll With Me, Life On Mars, WITW, Ashes To Ashes, Changes, Time - all just with piano accompaniment.

TVC-15 is a pop masterpiece - nonsense lyrics, infectious simple groove. 'Stay' is transformed from a dull rocker by the twin guitars of Carlos Alomar  & Earl Slick's toying with that simple guitar riff and Bowie improvising and pushing his voice.

Golden Years, my God, Golden Years. Not just the theme tune to an unloved Stephen King TV mini series of the Benjamin Button variety. Not just a skeletal Bowie on 'Soul Train' in front of its audience of groovin' black people whispering 'that Limey honky need some home cookin'!' but an astonishing recording - the falsetto, the finger-popping, knuckle cracking hook made of plastic soul.

Infamously, Bowie cannot recall much about recording the album. He describes that it was like working in a cocaine blizzard. Coming off the back of four of the most intense years of stardom that anyone has put themselves through alone (at least there were three other Beatles) he was coming undone. No wonder he used filming 'The Man Who Fell To Earth' as an escape and to create another cocooning character to protect him from the world and himself.   The album is a cry for help, an admittance that the joke has gone too far and he seeks normality. Well as normal as world famous pop pin-up can be. The man from the future is looking back, yearning for what was.

Oh what will I be believing and who will connect me with love?


'Word On A Wing' is so painful to listen to. The man is clearly completely lost mentally, physically and spirituality. Like 'Wild Is The Wind' there is little of the emotional barrier that Bowie often put up, his guard is down, he hasn't the energy to pretend anymore. The echoing pain  at the heart of the song in that 'Lord, Oh Lord I offer you...." line is almost unbearable.

But back to the beginning and the title track

Ten minutes of glory, three and a half til our hero announces his arrival by quiveringly crooning the lines at the top of the page  The band have been churning the repetitive bastard offspring of the chant of the ever circling skeletal family and it rolls forward til the suggestive 'making sure white stains' (Alistair Crowley reference ahoy!) and the drums with Alomar's guitar jumps and kicks the band into a funkier gear. From doom the song bursts into optimistic light, you can almost picture Bowie doing his foot to foot sideways dance and outstretching his arms pointing at an imaginary multitude. 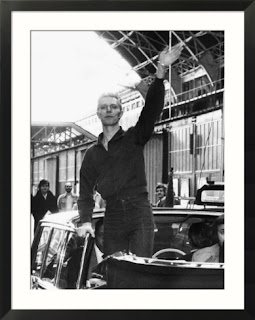 With only six tracks it hard for there to be an filler but this, despite everything that was going on in his life, IS the best Bowie album.  Its even David's favourite as he can't remember recording it he sees it as someone else's work. Following this Bowie would get some of the normality he craved, moved to Berlin, hooked up with Iggy and Eno to make some more groundbreaking music. Yet would never open up to his deepest fears and feeling like this again. The final line of this album's opening track would point to his future

The European cannon is here, yes it's here!