My parents record collection was weird.


And there was one other. A Beach Boys compilation called 'Good Vibrations' 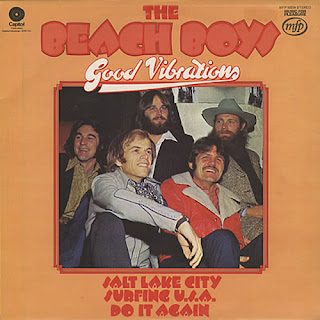 For starters, what the hell is that cover?

Do they even know where the photographer is or do they not care. I'm guessing that shot is from around 1972 or 73 - Brian is, as yet, not back although fawned over in the sleeve notes. Mike Love is already in full 'disguising the fact he is so damn bald' mode. Its an approach that The Edge adopted many years later

But it's such a strange compilation. its like it was compiled in a wind tunnel with songs shooting past the compilers head and they just grab whatever they can. Yet somehow it makes perfect sense

Starts with the 'best single ever made' (tm) in the title track - imagine the effect of that on a 6 year olds mind. My first exposure to this motley crew of beardies is this extraordinary music - sounds that I couldn't imagine WHAT would be making them. I think I thought the theremin sound was someone singing because it was so strange. I never knew at the time that this was the product of a man at the height of his majestic powers. That this early experience may well be the zenith of popular music - it simply rarely got any better.

It's followed by the cowboy on the cover's attempt to drag the band back to simpler times when they made an single in an afternoon rather than a year - and let's face it, he's been doing that ever since. 'Do It Again' is a great song, that chugging rhythm, the melancholy middle eight, the euphoric coda.

But then it gets strange '- 'Farmer's Daughter' from their 2nd LP. Brian's falsetto is just awesome - the backing vocals having that slightly bored edge of their early harmonies. It's a basic song but that lead vocal raises it up to a flawed gem.

Bobby Picket & The Crypt Kickers 'Monster Mash follows, live in concert from  Sacramento in the summer of 1963. Mike Love is the full ham with extra mustard, driving those girls wild with his Dracula impression and wolfman snarling. The 'In Concert' album was overdubbed to feck. Brian even used original studio tapes and sped them up for a couple of songs, dropping out notes and sounds so it wouldn't show.

This knockabout piece of fun leads to a gear crunching change of pace in 'I Just Wasn't Made For These Times' which is up there with 'Til I Die' in the most raw. naked and confessional lyrics that brian ever produced. The rest of the 'Boys' must have picked up on "No one wants to help me look for places where new things might be found" as a direct challenge to their inability or unwillingness to follow him into new directions. His disappointment and frustration that no-one was able to share and interpret the sounds he had in his head is clear.

And like Mike Love's unseen hand grabbing us we are ripped back to less reflective 'don't fuck with the formula' period with Berry riffin' 'Surfin USA' \ Salt Lake City and the silly novelty hit 'Papa Ooh Mow Mow' from the doctored concert tapes. 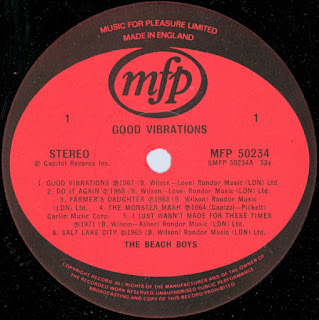 Nah sorry guv, that gearbox is well and truly knackered. See if you will insist on going from dopey hammy surf pop to subtle mature genius melodies this will keep on happening. It just wasn't built for these tunes, see?


'With Me Tonight' crawled from the wreckage on the Smile project, a lost part of the 'Heroes And Villains' saga, probably somewhere between the Cantina and Gee sections. Yet it resurfaced on the 'Smiley Smile' (brilliant) compromise album. A delicate little thing, pretty much accapella with minimal hammond organ backing.  Those honey dripping lows and falsetto highs. I'm guessing unlike the Smile Sessions this wasn't born out of 60 throat shredding takes but I'd wager perfection doesn't come easy. On 'Smiley Smile' some of the vocals were recorded with the band lying at the bottom of Brian's empty pool - I like to have that picture in my head when I listen to the track. 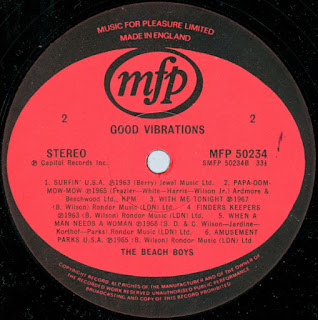 Back to the basic surf music - the daft 'Finders Keepers' with a Frankie Valli type chorus. The real hidden gem on the album is 'When A Man Needs A Woman' Brian's simple little ditty about impending fatherhood from the underrated 'Friends' LP. Strangely he is crooning to an unborn son but he ended up with two girls. Its childlike without being too saccharine, great nifty bass part, an organ medley adapted from 'I'm Into Something Good' and as he was with the Beatles in India - free from Mike Love's cynicism.

(You may detect a slight antipathy towards Mr Love thus far. I admire how he enhanced the vocal harmonies, his collaborative songwriting but the man, despite being absent for 'Friends' doing transcendental meditation and his spirituality, is an absolute bell-end.)

The album ends with a perfect example of what the early Beach Boys must have been to non US residents of the time. 'Amusement Park USA' the sound of the movie scenes - the track is overdubbed with the noise of a fairground, the rattle of the big dipper, the scream of the car's occupants as it swoops, the carnival barkers yelling to attract suckers to try and win a teddy bear for their sweetheart in a game of pitch and toss. It's the essence of teenage life in America to the last scream fades away. Such a bright and exciting world of fun, fun, fun that most of those listening could only dream of.

So that was my first introduction to 'America's Band'. These days I have so much - maybe too much - of their music. From the 50 odd CDs of their Capitol Years sessions to tapes of Brian Wilson's 80's & 90's rarities to the mammoth Smile Sessions box set - starts off like fascination, ends up like a trance.

These days you don't need ropey old vinyl pressings to hear what I heard when I was 6. You can just make a Spotify playlist 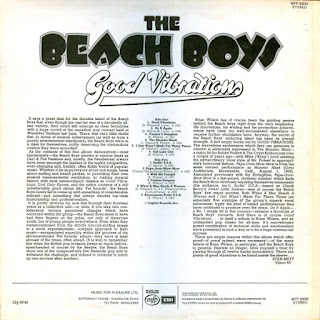