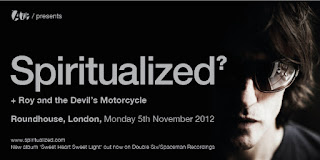 Support band have officially one of the worst names I have ever heard
Keep pets outside & don't return to the real world as it may explode in your face
Ladies & Gentlemen, its 'Guy Fawkes Up Without Medication Night'

Things rarely change in Spacemanland. When he wanders on stage you wonder if his spindly legs can get him all the way to his chair and you wish he'd have a few steak dinners so he had a little colour to his pallid cheeks.

So its Shades on, guitar in hand and looking stage left throughout - that's how we go for the next 2 1\2 hours. Occasionally he will spin on his swivel chair and face the audience for a minute or so of noisy riffing but whether he's actually looking at us is unclear. That along with a muttered "Thank You" is his zenith of communication with the audience. Although in a new development to his stagecraft during the heavier moments he took to stabbing at a keyboard like a zonked out Dr Phibes. Or when John Lennon goes mad during 'I'm Down' at Shea Stadium and started flailing at the keyboard with his elbows making a discordant squeal. That. 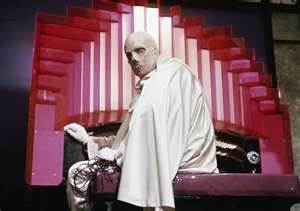 See, told you he looked pale

When I saw the band at the Royal Albert Hall last year they played the as-then-unreleased 'Sweet Heart \ Sweet Light' album in its entirety which was a lot to take in. Add into that the worst sound I have ever heard at the grand old dump to make an overall dispiriting experience. I forgot to go to a date at the Hackney Empire (I hope Stargreen enjoyed my money nevertheless) so was looking forward to hearing the new stuff properly live.

The set kicked off after some introductory riffing and grooving with 'Hey Jane' the lengthy lead single from the album and a sparky 'Electricity' but from then on it was new album tunes that whilst being more "pop" than your average Spz still wigged out when it felt right. During 'Heading To the Top's  climactic space trip a noted a few young kids down the front engaging in some furious headbanging behaviour that they had seen on film of Cream at the Royal Albert Hall in 1968. Alongside them was a tall fellow doing some interpretative hippy dancing that to all intents recreated Cliff Richards' dance moves to 'Power To All Our Friends' from the Eurovision Song Contest in 1973. (Third? You robbing European bastards!) 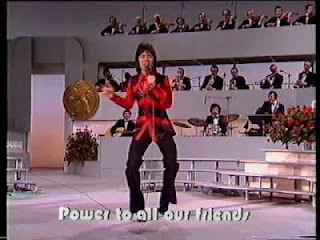 The SHSL material sounded superb live - a little looser and flakier round the edges than on the LP and often with extended psychedelic codas. These nerve jangling, heavy sections were enhanced by simple & effective visuals that repeated, warped and collapsed in on themselves.  There were quieter and more reflective songs too, sadly some of the piano was lost in a slightly muddy mix. 'A' Song; a (hopefully provisonally titled) new song was a humungous blues riff filtered through the space waves. The 2nd new track 'Perfect Miracle' was a little L&GWAFIS Pt 2 but no worse for it.  The main set ended with a couple of oldies 'Take Your Time' and a ferocious 'Electric Mainline' with the bass punching you in the chest and reverberating gently to your toes in a sensuously hypnotic way. Dance to the trance.

For the encore a giant roar went up when the sample of the title of their 1997 masterwork echoes through the old engine turning shed.  Always a favourite of mine (if I had a funeral song, this would be it) and Jason and the two backing singers performed it beautifully. A real surprise was to hear the Spaceman 3 song ' Come Down Easy' which I mistook for an 'In My Time Of Dying \ Fixin To Die Blues' cover at first.

Now I know what it sounded like when Hurricane Sandy hit New York - the end of 'Smiles' fair took my senses away with its glorious climax - a bass throbbing, guitar string snapping, drum pounding strobefest. The screens were filled with plain black and white lines and circles that added to the disorientation and confusion as your brain overloaded, making the room spin.

Not one for the casual fan this type of gig but a treat for the faithful. For some they're tedious & self indulgent. For me they're uplifting & life affirming - I'm right, you're wrong


Setlist:
Hey Jane
Electricity
Get What You Deserve
Too Late
Hey Little Girl
Heading for the top
Freedom
I Am What I Am
Mary
Life Is A Problem
So Long
'A' Song
Perfect Miracle
Take Your Time
Electric Mainline
ENCORE
Ladies & Gentlemen We are Floating In Space
Come Down Easy
Smiles
Posted by Dog Faced Boy at 14:19