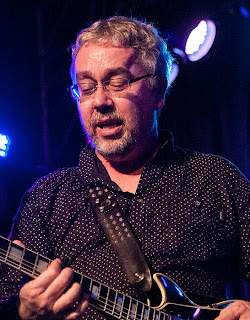 Ahh, those heady days of GLR (Greater London Radio, if you didn't know) of the very early 90's with its freewheeling mavericks, Baker, Evans & Morris' (Danny, Chris & Chris) of a weekend and chaps who could talk and loved music like Peter Curran and that Hepworth fella playing choice grown up pop music.

And if there was one band who were dancing in the heart of their playlists (although whether they actually we told what to play is a mystery) it was probably, the Waterboys. However when Karl Wallinger left that combo to start his own then GLR got right behind World Party.

As I escaped my metal phase (I was young, I was foolish) tried to connect with something new and reconnect with classic pop of the Beach Boys and the Fabs, World Party seemed to be there at the right time for me  Plus they seemed to chime with the public as they had modest hits.

Well, since then Danny Baker only plays MOR fake country gals in between his usual diverting nonsense, Chris Evans became an insufferable dick (maybe he always was) and Chris Morris made his own way in the world being a genius. The fact that he got the boot from the BBC for falsely announcing the death of Jimmy Saville on his radio show must be of supremely irony to a man who once made a devastatingly funny programme about the media coverage of pedophilia.

Karl Wallinger\ World Party continued to release albums but the public's interest waned. It must have been of little encouragement initially when his own record company took one of the songs from his neglected 'Egyptology' album and gave it to their star, Robbie Williams. He took the song and made a carbon copy of it and got a number one single. 'She's The One' became one of those tunes that no doubt is a popular choice for first dances at wedding receptions - a hook as hard hitting as Henry Cooper's with simple but beguiling melodies behind a love lyric.

So they may be a typical MOJO\Word act with little to excite for most but the above is why I made the trip through the wind and the rain to see them at the Zodiac, or rather the O2 Academy, in Oxford. It was half the price and about a twentieth of the size of the Royal Albert Hall, London two days later. First UK dates in 12 years so take your chances while you can

The gig was upstairs rather than the main room which made me wonder how many tickets they sold (I fear for the Albert Hall date) and it was fairly sparse crowd. Filled up a little before the support -Gemma Hayes.
I like her voice, she's from Ireland via LA so has an American accent when she sings - plenty of melancholy so right up my street. She announces a cover of 'Cloudbusting' at one point and I start to cringe, a) cos a lot of those lyrics about glowing yo-yo's  sound ridiculous in anyone else's mouth and b) cos I feared it would be another in a recent spate of breathy slowed down girlie versions of 80's classic so popular with advertising executives. Well she kept the power, speed and tension and did an excellent spare version of the tune and got generous applause for haveing the nerve to take a Kate Bush song. 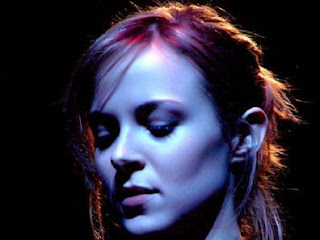 "I met Louis Walsh recently" she sighed as the room grumbled "he came to one of my shows and  afterwards he said he could 'make me a star' "I'd love to work with you, Gemma, I think you're great but I'd just want you to change two things" Intrigued she asked what those two things would be. "Stop writing songs, your songs are too sad, radio won't play them, I'm gonna hook you up with someone who will write you good happy pop songs. And secondly, you need to date someone famous, unless you are in the tabloids in the business you are nothing. So, are you in?" She's out and will go far.


So Karl Wallinger has filled out a bit and gone grey but in terms of voice and musical ability its business as usual. Opening with a new song from the rather spiffiing 'Arkeology' 5 CD box set of new, demos, covers, live and oddities from the past 20 years or so may appear a bit brave but as its more than a match for his older material then its a perfect choice. Such is the strength of the set tonight that he can afford to dispense with solid gold encore songs like 'Message In a Box and 'Is It Like Today?' so early in the set with the place singing along like its time to go home.

Must say that the audience really make tonight's gig. We may be few but our voices and sarky comments are strong. We've missed the old sod and we let him know it. The band includes David Duffy giving some fine fiddling (easy) and this is put to excellent effect particularly on 'Love Street' and the country stying of  'Sweet Soul Dream' which is a particular highlight for me. (Check out the version on the box set, its aces)


Another new gem 'Everybody's Falling In Love' - cover this un, Robbie! - before a couple of prime slices of sardonic pop 'Vanity Fair' and the rollicking fun romp that is 'Who Are You' from the utterly ignored last World Party album 'Dumbing Up'. Its 'Bob Dylan's 115th Dream' rhythm, delivery and hectoring style is clearly fun for the band to play and Karl cracks up a few times as he introduces the band to take their solos with his best Zimmy drawl "Whooo Are Yooooooouuu?". "Play it again!" someone yells from behind me and I concur - gawd, that was fun!

They finish the main set with a double whammy of 'Ship Of Fools' and 'Way Down Now'.  If they tour again I hope this band stays intact cos they do a brilliant job in recreating that special World Party sound. Ex-Oasis drummer, Chris Sharrock, is really on top of the songs tonight.And before you can say - WOT!!! NO 'All I Gave??????!!!! - they say thank you and goodnight with 'Thank You World'. I hope they come back sooner than later.

Waiting Such A Long Time
Is It Like Today?
Message In a Box
What Does It Mean Now?
When The Rainbow Comes
Love Street
She's The One
God On My Side
Call Me Up
Sunshine
Sweet Soul Dream
Everybody's Falling In Love
Vanity Fair
Who Are You?
Is It Too Late?
Ship Of Fools
Way Down Now
ENCORE:
Thank You World