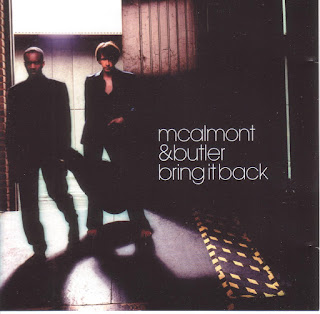 I think there are few people who would disagree that one of the mightiest, dazzling, sassy and empowering singles of the 1990's was Salt n Pepa\ En Vogue's 'Whatta Man'. However I also think that applies to Britpop's own odd couple - McAlmont & Butler and their re-imagining of 'I Will Survive' in the guise of 'Yes' in 1995


(Who says 90's Jools was all Paul Weller and Les Négresses Vertes?)

The best thing about Suede and the thing lacking ever since he left was the shamelessly flashy guitar work of Bernard Butler, his Ronno like riffs and hair swirling joi de vivre was infectious. David McAlmont is simply one of those people you couldn't invent, a jaw dropping voice with an ego to match. Who else would attempt to take this on and absolutely nail it

Their initial releases 'Yes' & 'You Do' were fairly successful and the inkie critics loved them  However they soon split acrimoniously and the hastily compiled 'The Sound Of McAlmont & Butler' from the two singles, b sides and a couple of out-takes was a fine reflection of their brief career. Many assumed that was the end of that chapter.


So it was a surprise when they reemerged in 2002 with a second album of material that was just as spiffing as the first. Unfortunatley the music world was now in the sway of the USA once again and bands like The Strokes were the flavour of the month. A joyous, glitzy and sunny record like theirs didn't make a dent in the public conciousness.

Which is a great shame as I think its one of THE greatest records of the the last decade.

It opens with the indie eqivelant of Viv Stanshall' s speech on 'Tubular Bells' as David introduces all the different layers of sounds and instruments as the song builds to a Temptations-tastic chorus via the sassy swagger of classic Prince. The title 'Theme From McAlmont & Butler' is a showcase for the album, it will sound like all these things and more.

The lead single 'Falling' is very much in the mould of 'Yes' with booming Spector Wall Of Sound drums and orchestration producing pure drama for the lugholes. McAlmont's voice floats above the lush strings - achingly yearning and desperate, effortlessly swooping and diving across the octaves.

It would be so easy for this album to fall into Lighthouse Family-like cheesy cosiness but it has that classic 1960's Motown and 1970's sexy disco grooves in equal measure. During the gap between the first and second M&B album, Butler was much in demand as a producer as his own solo career spluttered and died as he just didn't have the voice to carry the songs that others in the past had delivered with their own.

It really strikes home when ballads like 'Blue' really lets McAlmont's extraordinary voice take centre stage, what would be a mumbled acoustic filler on solo Butler effort just swims round your head, the aural equivalent of an ice cold drink on a hot summer day. His falsetto on the track is nothing less than miraculous. Its beautiful in its simplicity.

If there is a theme to the album (apart from 'Theme From....', arf!) then its appears to be their own tentative attempt to rekindle their working relationship - 'Can We Make It', 'Bring It Back', Make It Right and 'Different Strokes' . Yet the songs and production has a maturity and vision that demonstrates that when it came to the work they were focused and determined to bring the best out of each other.


I would also suggest that there may be something almost unique on the 2nd M&B album in that it features a man singing a love song to another man. As a child of the 1980's I'm oh so familiar with the Almonds, the Sommervilles, Boy George's etc but I would maintain that very few of those sang overtly about their love for their fellow man as McAlmont does on 'Sunny Boy'.

Even George Michael since he so publicly emerged from the closet has seen fit to be so 'straight' with his sexuality. It appears that gay pop stars can be flamboyant and cheeky but we don't want to really know how they really feel.

Above all though, the thing I love about the album and their music as a whole is the fun and life that it exudes.
David can never be anything less than excited and giving within his vocal, the music has such a light and airiness about it with the finger clicks, the laid-back licks and simple pop melodies.  It blows up the world so you can see all its colours, shapes and possibilities in all their beauty. Its unashamedly joyous and proudly a bit damn ridiculous.

I was lucky enough to see them a couple of times on the tour supporting this album and they were amongst some of the best gigs I have ever witnessed. The 1st show at the Scala the day the album was released may have been the happiest group of people I have ever shared a room with.

Teasingly a third album was written and partly recorded before Bernard hooked up with Brett Anderson for the deeply underwhelming 'The Tears' project. Suspecting this put David's nose out of joint once more, it remains lost with only the single 'Speed' as a taster of what could have been.

Perhaps when that 'Rockferry' money runs out Bernard will get the urge to get back with his old sparring partner again. They might not have been the best of friends but the tensions between them produced some of the best music to come out of the UK in the last 25 years.
Posted by Dog Faced Boy at 20:58 2 comments:

This too shall pass, I'm gonna pray

Sometimes some things just have to come out of your head cos they are searing with red hot pain. They often will not matter in a couple of hours but at the time they are all encompassing. So this is more for my benefit than anything else.

The thing is: I don't matter anymore

I haven't mattered for ages. Maybe I do to me but not to anyone else. No one has done anything to suggest that I matter to them and their lives. I used to. I once felt loved and that I mattered to a couple of special people. But I don't feel that anymore.

This may sound like a suicide note or a cry for help. It isn't either of those. Its just a realization that people don't NEED me around. Yes they may be pleased to see me from time to time but very rarely do people make the effort to invite me to places that they have to interact with me on anything but a superficial level.
I accept that may be something about me and I don't blame them.

I seriously considering jacking in the Facebook and Twitter last month as I feel its an opportunity for people to be more impersonal. A "like" can make people feel that they have been in contact so they don't need to actually communicate properly with anyone. Maybe its just part of the increasingly isolated lives we all lead with little time to consider others.

Thing is, we're not here for long and you don't half regret it when people leave that you din't take the time to spend more time with them.

Some of my mates reading this may be thinking "well, thanks a bunch? Not doing a good enough job are we?". NO! You are all wonderful and give me so much help and support. I don't deserve you. I guess the Fall line "He Is Not Appreciated" is running round my head and I'm not sure who I need to feel that appreciation from and why. Maybe I'd like a surprise birthday party. Maybe I'd like all my friends to meet in a pub (or, lets face it, a booth in the snug) when I'm alive rather than after my funeral. Maybe I just need a hug right now.

And I know I have it good - a roof over my head, family, plenty of things to amuse me and too many records to play so feeling this way is crap. An acquaintance of mine is facing homelessness and such hardship due to this fucking evil government and I really have nothing to complain about in comparison.

Sort yerself out, get on with it etc So get busy living or get busy dying etc. As I said, tomorrow is another day and this may not weigh as heavily on my mind as it does now but in order to alleviate my crushing depression I have to splurge this shit out. I'm just sorry you have to read it.