So after the rainy night before with the Boss\Macca fuck up, t'was a sunny day once Paul Simon wandered onto stage around 7.30. He has been described as a negative presence on a stage but I felt he was having a lot of fun up there. he frequently smiled, did some dad dancing and even cracked a joke at one point. Tonight he basically had two bands on hand, the band for the non Graceland material and the original band from the 1987 Graceland tour (those still with us). The talent on display was astounding. 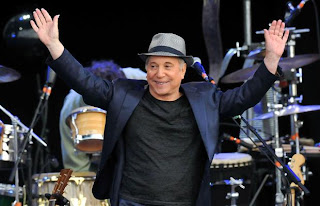 I'd had a little peak at the Dublin setlist from a couple of days before and was overjoyed to see Hearts & Bones as its a perfect song. Such a lightness of touch musically and lyrically, his performance of it was sublime. I was reminded of Carrie Fisher's comment about it - "if you ever find yourself in the position of having Paul Simon offering to write a song about you -DO IT!"

I had been disappointed that Jimmy Cliff who was billed to appear on the day seemed to have disappeared from the running order so it was a great surprise when he popped up grinning like a loon in his gold training shoes (wonder if he got them off Jimmy Saville?). 'Many Rivers To Cross' - oh boy, that was fabulous, not a sign of strain in his voice, fresh as the day he recorded it. His protest anthem 'Vietnam' sequed into 'Mother & Child Reunion' - no doubt a tip of that hat to that fact that Paul used Jimmy's backing band to record the original track.

I don't know how it made you feel the first time you heard Ladysmith Black Mombazo on the album. It was a sound unlike I'd ever heard before. The depth, the richness, the tension and spinetingling excitement of the new. Well to hear that sound reproduced live as it echoed round that park was astounding. Fuck the nosy neighbours, they should feel blessed they could hear that on a sunny Sunday evening. The dancing, the little ticks and sounds but overall the SMILES - it was infectious. They were gone all too soon.

So we then went bouncing into Graceland itself. So much to love here - 'Crazy Love II' in particular was splendid stuff, Ray Phiri's guitar work setting the pace with Bakithi Kumalo holding the groove with some fabulous bass. Hugh Masekela stepped up with a a couple of songs that linked back to the apartheid era South Africa that gave birth to the 'Graceland' album. The passion and raw emotion during 'Stimela' was astonishing

Compared to the previous night I thought the sound was excellent. You could hear the seperation of the instruments, the little fills and riffs, vocal lines and bass runs. Yet the end of the 'Graceland' set - with what else but 'You Can Call Me Al' - with all its noise and celebration was a sharp contrast tp one of the moments of the night where Paul, alone with an acoustic, performed 'The Sound Of Silence' as if it were the first time. The way he picked his way through the song, subtly playing with the melody, singing much less stridently turning the song into a hymn.

Yes the 'in the naked light I saw, ten thousand people maybe more" line made a cheer roar across the crowd and it may be corny but I got a little shiver down my spine nonetheless.

If that wasn't enough, Jerry Douglas, who had appeared earlier with Alison Krauss & Union Station, ambled out to add some eerie and yearning dobro guitar to Simon's thoughtful picking on 'The Boxer' with the massed choir in the darkness note perfect. "There's a lot of friends up here tonight...and a few out there" Simon says to a roar of approval. "No" he deadpans "I meant some of my friends over there" he says pointing to the VIP section.  *boom-tish*

Soon it was all over bringing to an end three hours of sheer bliss that went by so fast. This felt like a landmark concert for Simon and a celebration of a time and tour that he can now have perspective on as the demonstrators have gone.


Thanks to my friends for sharing such a rare sunny night under the London sky with me and for helping me cope with the crowds by simply being there.

You Can Call Me Al

Encore:
The Sound of Silence (solo)
The Boxer (with Jerry Douglas)
Late in the Evening
Still Crazy After All These Years
Posted by Dog Faced Boy at 17:03