These two consecutive dates suggested a more shaking up of the setlist than usual and we were not disappointed. After the standard opening rock n roll beginning, the wheel started to spin and for me, only duplicated three songs from the Birmingham main set the week before. Was thrilled to get a pair ofd songs from Imperial Bedroom including a sparky Beyond Belief. After a pair of Johnny Cash covers with amusing anecdote he introduced his brother Ronan's band 'The Bible Code Sundays' as the first special guests of the night.

The band added some pipe and whistle to excellent readings of 'American Without Tears' and 'Little Palaces' and ending with a little instrumental jig n reel. Mr Nieve made my night with his choice of piano song for the night - Shot With His Own Gun which Elvis and he performed superbly. The real surprises came in the encore when '30 Of Foot of Grunt' lead singer and sometime actor Russell Crowe joined the band for 'Trouble' ("one of my ambitions to play an Elvis song with Elvis" quipped Russ, thankfully not in his strange Robin Hood accent) and an ill advised attempt to sing like Cash on 'Folsom Prison Blues'. 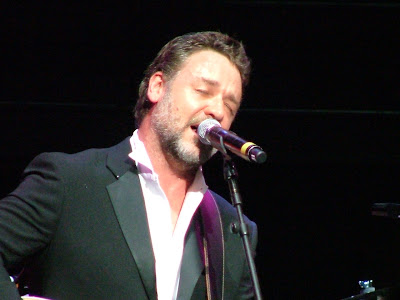 (Photo by Neil McNab)
the real treat was to see Martin Belmont onstage with EC for the first time in 32 years when he stood in for an ill Steve Nieve. Martin appeared on Elvis' 1981 single 'From A Whisper To a Scream' and, blimey, appearing like a garden gnome, its the other vocalist on that single - Glenn Tilbrook. 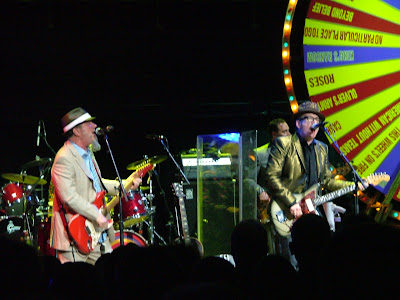 (Photo by Neil McNab)
The rest of the encore was very much a slightly ragged romp amongst pals with a closing Peace Love & Understanding halted as Steve Nieve appeared above the band playing giant organ (missis). A right rollicking first night.

I Hope You're Happy Now
Heart Of The City
Mystery Dance
Radio Radio
The Stations Of The Cross/Get Ready
New Lace Sleeves
Beyond Belief
Oliver's Army
Long Honeymoon
Cry Cry Cry
I Still Miss Someone
American Without Tears
Little Palaces
Shot With His Own Gun
Watching The Detectives/Help Me
Alison
Everyday I Write The Book
Chelsea
I Want You
ENCORE
A Slow Drag With Josephine
Jimmie Standing In The Rain
Tramp The Dirt Down
Shipbuilding
Trouble
Folsom Prison Blues
From A Whisper To A Scream
Pump It Up
Peace, Love And Understanding


-----
I was flying solo the next night and looking forward to different set and guests. Right from the off I wasn't disappointed as the band blasted through 'Lipstick Vogue' and 'You Belong To Me'. No 'Heart Of the City'? Could this be a foreboding?

Jackpots were back in style tonight and I was happy gor get a big slice of, err, "Get Happy" with Falling Down, 5ive Gears, Fidelity & a mighty King Horse quickly followed by a "Time" Jackpot which led to Strict.. \ Man Out Of.. and the popular ditty by 60's hitmakers The Rolling Stones - 'Out Of Time'. Then came tonight's special guest via a fixed spin from Napoleon. 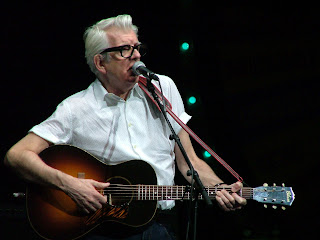 (Photo by Gelliant Gutfright)
The greatest singer and songwriter in England - Mr Nick Lowe ambles out to sing 'Poisoned Rose' which features on his new album and does a majestic job. He's gone after that but we know he'll be back. Steve Nieve climbs up to the grand organ for a song from Brutal Youth, an album that has been largely ignored on this tour, and his accompaniment of Elvis on 'Favourite Hour' is my highlight of the tour so far. 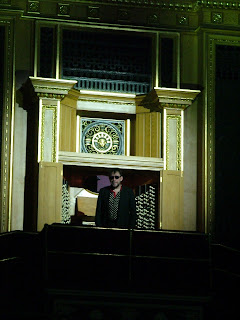 The encore features a mean and moody 'National Ransom No.9' before Nick returns to run through 'Heart Of The City' and 'Peace Love & Understanding'

Lipstick Vogue
You Belong To Me
Mystery Dance
Radio Radio
This Year's Girl
Spooky Girlfriend
Party Girl
I Can't Stand Up For Falling Down
High Fidelity
Five Gears In Reverse
King Horse
Alison
Strict Time
Man Out Of Time
Out Of Time
The Stations Of The Cross/Get Ready
Poisoned Rose
Watching The Detectives/Help Me
Favourite Hour
Deep Dark Truthful Mirror
Shipbuilding
A Slow Drag With Josephine
Jimmie Standing In The Rain
Tramp The Dirt Down
National Ransom No.9
Oliver's Army
Beyond Belief
Purple Rain
Clubland
Pump It Up/Day Tripper
Heart Of The City
Peace, Love And Understanding