5 Gigs In Reverse: My Costello UK Tour: Night 1 in Birmingham

I've always had this deep sense of resentment and loss in my heart that I was not old or wise enough to see Elvis & the A's 1986 Spinning Songbook tour which took a simple idea that shook up the often dull and predictable live rock gig. No-one has tried it since.

I always promised myself that if Elvis toured it again I would go to as many as I could. So when "The Revolver Tour" started to roll last year I hoped i wouldn't have to make the trip across the pond just to see it. So when he announced UK dates I went for broke (almost) and booked up for five.

Since I'd booked the tickets I'd gone and got myself a proper job and the 1st gig fell on my 2nd day at work. So I was a bit tired as I drove through the wind and rain on the M40 up to the Birmingham Symphony Hall. A truly great venue with excellent sound and I've seen some great Costello shows there

Walking into the hall and seeing that wheel towering over the stage was quite a moment
as the PA played circus muzak version of EC hits and songs from the shows. 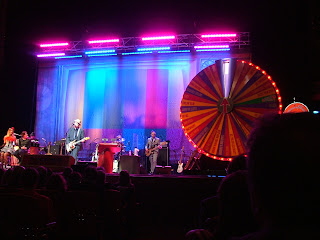 At the appointed time on the ticket the lights went down as the band strolled on but with a "He's a fine figure of man and handsome too" the lights were up and we were off for a initial flurry of rock n roll songs - the only part of the  set that was on the map. After a punchy "Radio Radio" EC picked up his cane, donned his top hat and MR NAPOLEON DYNAMITE (he was around waaaayyy before the film) was our host for the night. Its hard to imagine the snarling avenging nerd of 77 being a slightly camp all round entertainer with a fine line in scripted and impromptu patter.

His dancers\assistants for the evening were responsible for bringing people 'from their seats in the stalls to their place in the stars". After their spins the guests could sit in the bar or dance in the go-go cage with one of the nubile young ladies or at one point with EC playing his guitar.

The wheel was very fond of jackpots tonight which meant a string of songs so the show flowed in a way that more spinners choosing individual songs would have broken up. This meant that a couple of spinner were sitting up on the stage for six songs. A couple of punters tested their strength with the 'Hammer Of Songs' 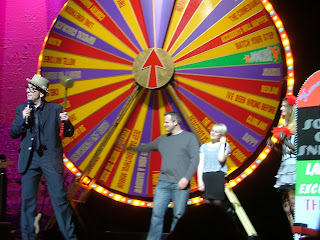 with a ring of the bell meaning a free pick from the wheel.

Personal highlights were, as ever, 'I Want You' with Steve Nieve playing a harpsichord part from the Beatles song of the same name as the stage was drenched in blood red light. The intimacy and claustrophobia of the original recording really came across in this live arrangement.

'Tramp the Dirt Down' is sadly as relevant today as it was when EC first sang it. the bogeyman may have changed but the anger against a heartless and careless government still holds true. The Imposters gave the song a stately weight that an acoustic version would have missed.

Napoleon came and sat across the aisle from me to sing randy Newman's 'I've Been Wrong Before' and I loved the ukulele intro to the encore. I don't think I've heard Steve play 'Shipbuilding' better and Elvis was on top voice all night

Three hours later with the clock on the wall saying it was quitting time the band had the place on their feet for 'Peace Love & Understanding'.

Can I do it again please, Daddy? Yep on Wednesday night at the Albert Hall.....

"JOANNA" JACKPOT
Talking In The Dark
She

ENCORE:
A Slow Drag With Josephine
Who's The Meanest Girl In Town, Josephine
Jimmie Standing In The Rain
Tramp The Dirt Down
Oliver's Army
Shipbuilding
Watching The Detectives
Chelsea
Peace, Love And Understanding
Posted by Dog Faced Boy at 00:26