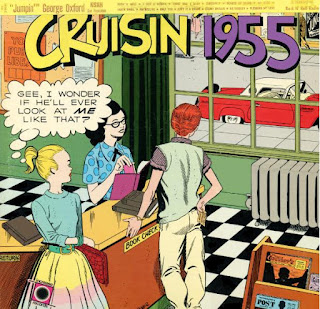 Imagine if you will a machine that could pick up radio signals from the past. And you could tune it into classic US radio shows to get the sound you'd have heard riding along in your automobile, going to pick up your best girl and hot foot it to the hop across town

Well we can dream. However there is a great series of albums that can give you some of that. The 'Cruisin' series from 1995-1970 give you a slice of a radio show from a US city. You get about 45 minutes of classic tracks, adverts, film trailers, DJ chatter and nonsense. It took the UK more than a decade to even catch up to music radio this exciting and alive. 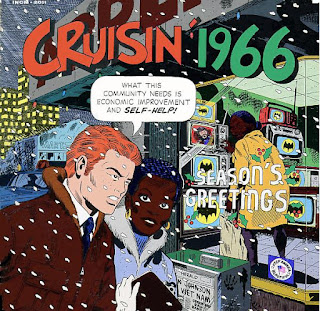 A particular favourite of mine in the 1965 edition with Robert W Morgan from "Boss Radio" KHJ in Los Angeles. The USA is in the grip of Beatlemania and a caller has to chant "yeah yeah yeah" to win a competition in their special Beatles promotion for the week. There is whole different language going on here with 'Magic Key' times, "Boss Angeles", The Real Don Steele and ads for Laramie cigarettes. The songs are often familiar as your own family but in context of a show they have an added vibrancy 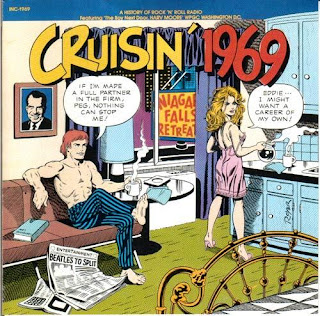 As you may have noticed the albums have these great comic strip covers which chart the lives of Eddie & Peggy through the years with comments on the news and events of the time. They have a rough time through the sixties but as you see Peg ends up barefoot, pregnant and in the kitchen in the end. What girl could ask for more? A career you say? Hey baby, that's cute, hows that pie coming along?
There is a detailed page about The Cruisin' series here http://leemichaelwithers.tripod.com/cruisin.htm

Beware - a company is putting out basic rock n roll comps with similar covers, no DJ stuff so avoid them